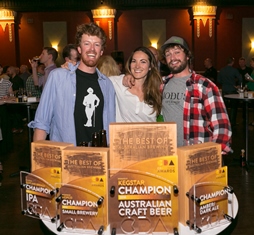 Sydney’s4 Pines Brewing Company triumphed over 92 competitors in the AIBA Pale Ale category to be crowned champion with their ESB. But in the battle of the states, it was Victoriathat produced the largest number of winning breweries, with Moon Dog Brewing,Two Birds Brewing andLa Sirène all receiving Champion trophies.

Industry stalwart Willie Simpson was honoured with the CBIA Services to Australian Craft Beer Award, recognising his lengthy contribution to the industry both as a brewer, craft beer advocate and as a reviewer.

On receiving his award, Simpson said, “I’m really very humbled and honoured to be the inaugural recipient of this award. The craft beer industry is really finding its legs in Australia and it’s a great time to be part of it. After writing about the Australian craft beer scene for so long, it’s very exciting to be in it now as a brewer.”

CBIA chair Peta Fielding feels these awards are an important celebration and will help shine the light on Australia’s thriving craft beer industry.

“With more than 280 beers from 80 breweries submitted for the Craft Beer Awards, we were blown away by not only the quality but the variety of brewers we have in Australia. We really feel the awards offer a unique opportunity for Australian craft breweries to be benchmarked against their local peers and are proud the CBIA can help draw attention to these talented brewers.”