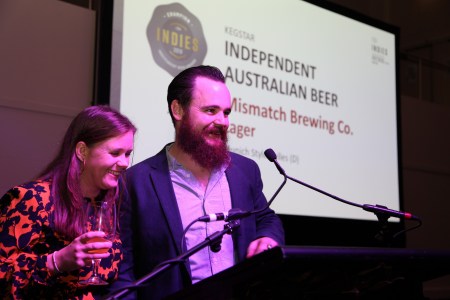 Formerly known as the Australian Craft Beer Awards, the Indies are a celebration of the very best in Australian independent brewing.

In order to win, Mismatch Lager had to beat a total of 756 entries – the largest number of entries in the awards yet – of which 443 were draught and 313 were packaged.

The other Champion Trophy award winners for 2018 were:

Based in the Adelaide Hills, Mismatch’s Lager is inspired by the great Helles-style beers of Germany, and Munich in particular. A smooth drinkable beer, it celebrates the famed Hallertau hops.

Mismatch’s Owen Lyons was very surprised by his two wins, having also won the Lager category, and described the feeling as “humbling”.

“It’s just amazing that someone appreciates the fact that we can brew a clean, crisp lager – I’m a bit lost for words,” he told Beer & Brewer.

“We make hoppy beers, we make sour beers, we make lager – our approach is to try and make every beer, which not every brewery does. Our lager is a Helles lager, but we’re a craft brewery so it’s tailored towards the palate of our consumers. 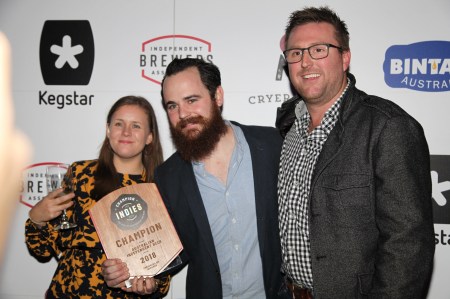 Mountain Goat co-founder Dave Bonighton was bestowed with the IBA Services to the Industry award, recognised in a speech by Two Birds’ Jayne Lewis for his years of service and dedication to the craft brewing scene.

In a further reflection of the continued dominance of Pale Ale, 179 of the entries were for this style; 14 were awarded a gold medal, 42 a silver and 70 a bronze. Lager (114) and IPA (103) also received a high number of entries.

The awards night was the culmination of BrewCon 2018, which ran from 26-28 June at the Australian Technology Park in Eveleigh. The conference is the IBA’s keystone event and exists to build excellence and best-practice in the Australian beer industry.