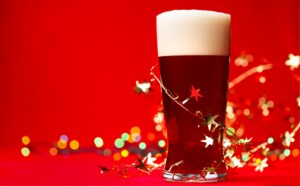 Forget wine pairing, this Christmas lunch, it’s time to start beer pairing. Unlike its fancy grape-derived cousin, the unassuming beer has long been neglected as a worthwhile culinary accompaniment. But with more craft beers on the market than ever before, things are starting to change.

Beer Diva, Kirrily Waldhorn, has worked in the industry for 17 years as a beer presenter, educator and consultant, and says that compared to wine, mainstream beer hasn’t really provided consumers with much depth when it comes to food pairing opportunities.

But with the rise of craft beer in recent years, and the huge variety of styles and varied flavour characteristics that they offer, Waldhorn says that “the options available to curious culinary creators are becoming endless.”

How exactly does one choose which beer to match with a certain dish? According to Professor Pilsner, Peter Mitcham, for the casual Christmas cook, pairing your lunch with the perfect craft beer comes down to ‘hooks’.

“Most food dishes will have a key ingredient or element, whether it be a texture, a spice, a flavour or an aroma – that’s a hook. Beer’s exactly the same and when you find a hook from the beer that matches up to a hook in the food, magic happens,” Mitcham says.

If it sounds intimidating, don’t worry: Professor Pilsner and the Beer Diva have prepared a handy list of the best beers to go with all of the classic Christmas Day lunch options.

Everyone loves a seafood buffet spread at Christmas, and conventional wisdom might have you reaching for a white wine or Champagne to pair it with. However, according to the Professor, a simple, clean and crisp lager is the perfect match for light seafood; when it comes to oysters or mussels, “look for something a bit darker and richer.”

Ham is a Christmas classic, but given we’re in Australia and expecting a warm and sunny day, look to a beer style such as a spritzy and refreshing saison.

“This style of beer offers up some farmhouse funk and fruity ester characteristics, which will contrast the saltiness of the ham perfectly,” says Waldhorn. “It’s delightful when served in a Champagne flute and every bit as elegant!”

“With lots of elements to consider, from the juicy creaminess in the meat to the crackly skin on the outside…you need something that’s not too heavily bodied that would take away from the delicateness of the chicken, such as an Australian pale ale,” says Mitcham.

Christmas roast pork will likely have some sort of sweet, caramelised glaze. If you’re indulging in this rich delight, pair it with a Scotch ale. “With its decadent dark fruit and sweeter notes, it will complement the glazing perfectly,” Waldhorn says.