Well this festive season there’s exciting news for everyone. For the third time in as many years, Tasmanian craft cider makers Willie Smith’s have collaborated with Lark to create a small batch whisky barrel aged cider that delivers a toasty complexity and plush mouth feel which will satisfy and surprise the palate on multiple levels.

For the non-technical alcohol appreciators amongst us, it means that the cider tastes uniquely delicious and that your mouth will be filled with layers of cider and whisky flavours.  The cider has been released with the thick textural yeast lees still in the bottle, which will continue to add creamy complexity over time in the cellar.  The cider, served at around 12 degrees C, makes the perfect accompaniment to an intimate festive cheese platter.

Willie Smith’s Cider Makers release a limited release cider several times a year with a focus on innovation and experimentation. The cidery recently won Best Cider in Australia at the Australian Cider Awards with their French Blend drop, a pure cider apple cider made from 14 different French apple varieties grown at their orchard in Tasmania.

There are just 700 bottles available of this incredible product which retails for $50 for a 750ml Bottle at 9.7% ABV.

The cider will be available in selected venues and bottleshops in Tasmania, Victoria, NSW, the ACT and Queensland, and also from Willie Smith’s Apple Shed, in the Huon Valley and from the Lark Distillery Cellar Door in Hobart.

A limited number of bottles are also available from purchase via the website www.williesmiths.com.au. 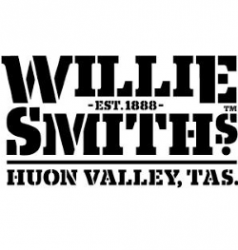