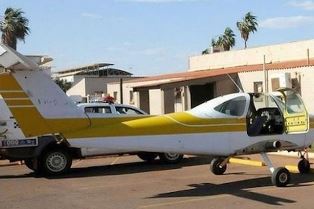 A man who drove a wingless plane down a busy street, then stopped at a pub for a beer, has been charged by police.

The man drove the Beechcraft two-seater light aircraft along the main street in Newman, Western Australia, before parking in front of the Newman Hotel and leaving the engine running.

According to reports, the aircraft’s propeller was still spinning as the 37-year-old man sat in the pub and drank his beer. When police arrived at the scene, they found an exposed fuel line hanging from the side of the plane attached to an unsecured jerry can inside the cabin.

The incident occurred on Friday 31 October at around 2pm. Police later charged the man with Endangering Life, Health or Safety of a Person. The accused is due to appear at Newman Magistrate’s Court on 18 November.