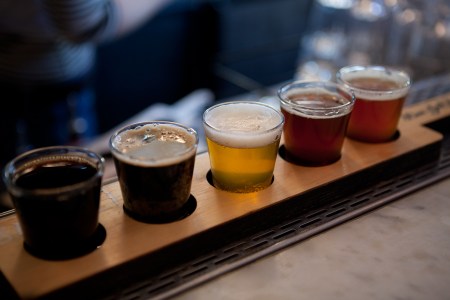 A lineup of beers from one of California’s leading craft breweries, Firestone Walker Brewing Co, will be showcased at The Local Taphouse in both Sydney and Melbourne next Friday 16 June.

Firestone Walker were very successful at the recent AIBA awards, taking home Champion International Beer for its Feral One (for which it also won Best Belgian/French Ale) and Best Pilsner for its Pivo Pils.

At the St Kilda event, two beers from the brewery’s Barrelworks program will be pouring, of which one – the Barrelworks Bretta Rose – will be tapped in Australia for the very first time.

Steve Jeffares, co-founder of The Local Taphouse, told Beer & Brewer that the idea for the event was born out of a trip to the Firestone Walker Invitational Beer Festival last year.

“It’s considered one of the leading craft beer festivals in the United States and I went over there, also with my GABS hat on, and tried some of the beers at their breweries, both in their normal brewery but also the Barrelworks brewery and met some of the guys behind Firestone Walker as well.

“When Adrian Walker from Firestone came over for Good Beer Week we hosted him at our Brewers and Chewers event, and also decided that we should run an event when there was a little more ‘clean air’ so to speak – because there’s just so many events on during Good Beer Week.

“We want to showcase not only their well-known beers, but we’ve also been lucky enough to score a couple of kegs of some very rare beers, some of which haven’t been tapped in Australia before.”

One of the award-winning beers at the AIBAs, the Pivo Pils, will be pouring in both Sydney and Melbourne; Jeffares describes it as “incredible” and “the one that that introduced me to Firestone Walker”.

“We’ve been talking to them for a number of months about getting involved with the Taphouse both during and after Good Beer Week and we’re very excited to be running this event next Friday.”

The Local Taphouse will be hosting a number of events over the coming weeks: the Star Spangled American SpecTAPular on July 8, as well as a Green Beacon Brewing showcase of eight beers starting on June 20, and an ‘Ale Stars’ beer appreciation session with the brewery’s Head Brewer – which took home Champion Small Australian Brewery at the AIBAs – on the same evening.

For more information about these events, head to The Local Taphouse’s St Kilda or Darlinghurst Facebook pages.