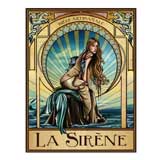 If you’ve been missing the presence of La Sirene in your fridge this year, take heart – the crew has announced that the reason they’ve been ‘off the radar’ this year is because they’ve been massively busy building their own brewing facility in Alphington, Melbourne.

The good news for La Sirene fans is that the new brewery is now fully operational, and the beer will start to flow again in mid-January, 2014 – starting with their flagship Saison and the ever-popular Wild Saison. La Sirene also has another, yet-to-be-announced third beer on the way, which will be available in keg format.

For more information on when you can get your hands on a La Sirene in the new year, keep an eye on their website.