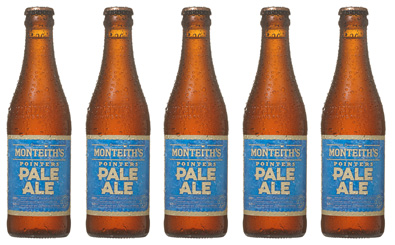 The brewing team at Monteith’s wanted to create their take on the popular Australian style of beer – pale ale and they came up with this brew.

The new Monteith’s Pointers Pale Ale has a blend of five New Zealand hops, Green Bullet, Wai-iti, Motueka, Rakau and Kohatu, one for each of the stars in the Southern Cross, which the brewers say create “an upfront burst of tropical fruit aroma, and reveal mandarin and peach notes on the lips. Cloudy and golden in colour, the beer is balanced using a select blend of Munich, Ale and Wheat malts, which create a crisp lingering finish.”

Tony Mercer, head brewer at Monteith’s said: “We’ve taken on the challenge to craft something unique and distinctively Kiwi for the discerning Australian pale ale drinkers. Our thinking is that of all the stars in the night sky, there are some that distinctly stand out and this too can also be said of beers.

“Of the myriad of beers that sit amongst the shelves there are some that stand out and steer you back time-and-time again. We wanted our Monteith’s Pointers Pale Ale to be that guiding light, that ‘pointer’, so to speak.

“This has been a labour of love over the past 12 months, and we’ve had everyone at the brewery pitching in. Personally, I think the hard yakka has paid off, and we are bloody proud of this new brew. Pointers is certainly one to set the bar by.”

Monteith’s Pointers Pale Ale, is a 4.2 per cent “full bodied yet sessionable beer” and is available in bottles and on-tap throughout Australia.