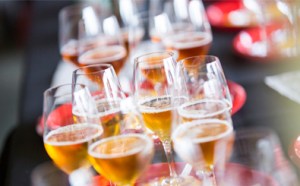 A panel of 19 independent judges including brewers, sensory analysts and hop experts has gathered in New Zealand to pick the winning brews in the 2017 New World Beer & Cider Awards.

Held at the Westpac Stadium in Wellington on the 9th and 10th of February, the panel will swirl, sniff, sip and debate over 2,500 glasses of beer and cider across 12 categories.

This year over 500 brews were entered. Held to international standards, the panel will blind taste each entry to determine which stand out from the crowd in terms of technical excellence, balance, mouthfeel and – most importantly – drinkability.

“It’s a testament to the credibility of the New World Beer & Cider Awards that it has been able to attract some of the most respected names in the brewing industry, along with some exciting new talent,” says Chair of the judging panel, beer writer and author Michael Donaldson.

“When their combined expertise tells you a brew is worthy of a gold medal, you can be assured its well-made and highly drinkable. All the judges have highly trained palates and their job is to swirl, sniff and sip the beer before deciding if it’s worthy of a medal.

“They will discuss the technical merits but the focus is on the most basic requirement of a medal-winning beer: great flavor.”

Gold, Silver and Bronze medals will be awarded to suitably worthy entries, with the Champion awarded to the top entry in each category; shoppers will soon be able to enjoy the Gold medal winners of the 2017 awards in New World supermarkets.

Entries were received from breweries large and small throughout New Zealand and abroad, with the criteria being that the brew is available in cans and bottles, and that brewers can deliver the required volume to satisfy the thirst of New World shoppers.

Steve Anderson, Managing Director of Foodstuffs New Zealand, explains: “The New World Beer & Cider Awards are unique as they have been specifically designed with the consumer in mind, making it easier for New World shoppers to purchase with confidence.

“For a smaller brewery, the chance to be stocked at New World stores is an incredible opportunity to grow their business and reach beer and cider drinkers across the country. What we saw in previous awards was niche and micro-breweries go to country-wide audiences overnight.

“The New Zealand brewing industry is producing some of the best brews in the world, and New World is proud to support it.”