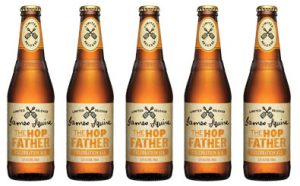 James Squire has released a new beer called The Hop Father Celebration Ale, in a nod to the man and legend who successfully grew some of Australia’s first hop plants.

As the name suggests, The Hop Father is a hoppy pale ale with a rich, full-bodied character brought to life with Aussie malts. An initial sweetness gives way to a cleansing bitterness thanks to the use of Simcoe hops, providing lip-smacking pine needle and fruity aromas with earthy and spicy notes.

Members of the James Squire family were instrumental in the creation of The Hop Father. Chris Sheehan, head brewer at Malt Shovel Brewery, said the brewing team was excited to work with members of this historic lineage.

“We have a long history of getting together with the James Squire family, to celebrate our namesake, be that for reunions or special events,” he said.

“It was at one such event recently, at the Malt Shovel Brewery, enjoying a drop with James Donohoe Senior, when we had the brainwave of getting together with the family to create a special celebratory brew.”

Two of James Squire’s living descendants were ready to get their hands dirty to create the ale: James Donohoe Junior, eight descendant of the man himself (and naturally a craft beer lover) and Amy Legge.

“Amy and I jumped at the chance to craft this special beer, getting amongst it with Chris and the team. It was such an amazing experience,” James Donohoe said.

“I can’t wait to get stuck into a Hop Father with my father and his father.”

The release of this special edition ale is the first in a long line of developments for the James Squire brand heading into 2017.

The Hop Father Celebration Ale will be available bottled at Dan Murphy’s stores nationwide and on tap at James Squire Brewhouses from early January.