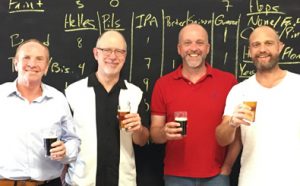 The Institute of Beer (IOB), a new company dedicated to the education of the country’s beer drinkers and professionals, officially opened for business last week.

The company has pulled together some of the best beer brains in the country — along with the best international beer qualifications — to create something that until now was lacking in Australia and New Zealand: structured, professional and accredited beer training.

The IOB’s key offering is the first ever licensing of the Cicerone range of beer-related qualifications anywhere in the world.

Students can start with the entry level Cicerone Certified Beer Server (achieved via online exam) and work their way up to the Certified Cicerone, which typically requires four-five months of study and the sitting of a two-hour written test and one-hour tasting exam.

Already hugely successful in the US, the qualifications have become a prerequisite for anybody working in the industry in America. The IOB team believe that the same will eventually happen here in Australia.

“It’s not just about knowing beer, it’s knowing how to store it, serve it and most importantly assist your customer with making good choices in what has become a bewilderingly complex business,” said Neal Cameron, IOB education director.

“And if someone’s paying $10 for a schooner of beer, its unforgivable if that beer is not served in perfect condition – something that we’ve experienced far too often even in our best beer venues.”

The IOB is the brainchild of some of Australia’s beer industry leaders. The likes of Ian Kingham and David Phillips will combine their depth of beer knowledge, with managing director Peter Fullbrook’s lifetime of experience in training and development companies.

According to Fullbrook, they’re already getting quite a lot of interest at this early stage.

“There’s a lot of people out there who are starting to realise that the standards they set for their staff when dealing with the public, and having a degree of knowledge about beer, is starting to really make a difference to their commercial proposition,” he told Beer and Brewer. “It’s an exciting time.”

While open in-house programs and exams start in February next year— and will be held in Sydney, Melbourne and Perth, with future plans to expand to Brisbane and Auckland— beer lovers and professionals alike can build and demonstrate their knowledge in any of the online programs available on the IOB website right now.

For more information, head to www.theinstituteofbeer.com.