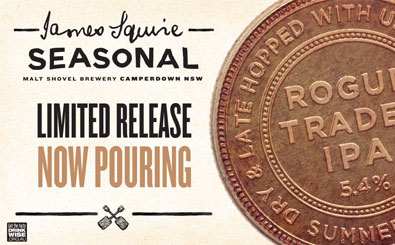 Available exclusively at James Squire Brewhouses, the beer is packed full of big, brassy hops and is described as a “refreshing IPA with big hop flavour and warm rounded malt.”

“When drinking The Rogue Trader, beer lovers can expect tropical and citrus fruit characters from the classic American hop varieties used. This is accompanied by a cleansing golden body finish, which gives way to the trademark bitterness our fans know and love.”

The Rogue Trader is available on tap at the following James Squire Brewhouses: