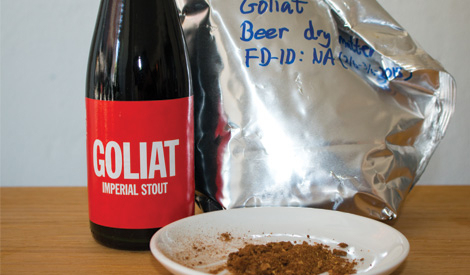 Danish gypsy brewery, To Øl, is experimenting with instant beer

Powdered, just-add-water beer. The very idea should disgust any beer drinker who knows their IPA from their Pilsner. Or even anyone who’s had a brush with instant coffee. But what if just such a product was being developed by people with a stack of beer cred, people who value flavour and quality above all?

Tobias Emil Jensen & Tore Gynther are the founders of To Øl, a Danish gypsy brewery. They learnt to brew from Mikkel Borg Bjergsø, the owner of Mikkeller, who was their teacher in high school. In Europe and around the world, the guys aren’t regarded with quite the same level of respect as their famous mentor, but they’re close. And yet, they’re hard at work developing instant beer, a product which seems to stand for everything the craft beer world isn’t. We called them up to find out why.

Q When did you start thinking about the idea of instant beer?

Tobias Emil Jensen: Since I finished university a few years back, we had some contacts. They have some associate professors who are really interested in how you can push the boundaries in terms of how you make beer.

So we looked at that, and then I happen to have a friend who works for a big company here in Copenhagen, GEA, that performs these freeze-dryings. So we set up a meeting with him a few months ago and started talking about the possibilities.

We’ve done a coffee stout – since there’s coffee in the beer, we thought it would be fun to have something similar to instant coffee, with a lot of body and high level of sugar. But we’ve also been trying with a fruit IPA to see how the fruit survives the freeze-drying. We’re still waiting to get back our saison, to see how a funky brettanomyces flavour turns out in powder. Finally, we just did a clean, hoppy Pilsner as a baseline for comparison. We’ve got two of the four back.

Q And what did you find?

Tore Gynther: We do a lot of experiments and love a scientific approach to brewing. We thought it would be exciting to develop an instant beer, but it’s always difficult to create a useable product with your initial batches. But with the first two beers we actually managed to reconstruct a beer that doesn’t assemble fully in terms of strength and body, but tastes way better than a lot of 6 or 7% stouts out there. When beer has fermented, you can look at it as water, alcohol and dry matter, such as sugars, maltodextrin or bittering units. This freeze-drying process separates the three. By putting all these three together, you theoretically get the same beer back.

Q How does the freeze-drying process work?

TEJ: We didn’t invent it. It’s a standard physical process. Water exists in three states, solid (ice), liquid (water) or gas (steam). For anything to convert from water to steam, you normally need to boil it. That’s what’s happening at normal atmospheric pressure. But if you freeze it to -40°C and put it in a vacuum of 0.1 millibar, you’re in a field where ice sublimates, which is the process of going directly from ice to vapour.

Q So when it becomes a powder you then have to add water and the alcohol back in?

TEJ: Yes, but we’re still figuring out what we want to do with this. You can change what you want to mix back together. If you leave out the alcohol, you get a really nice-tasting non-alcoholic beer. Or if you leave out the water, you get some kind of beer spirit or beer brandy that has a really dark colour and tastes fantastic as well.

We’re also looking at how much we can integrate into the powder. One important thing is carbonation. Everybody has access to water, but not too many people have access to sparkling water. So we’re looking to see if we can make a powder which turns into carbonic acid when you mix with water. So you’d have a container with the two powders, you mix it with water and you get a beautiful carbonated beer.

TG: At the same time, it’s also possible to get alcohol into the dry matter. But then again, as a consumer some of the interesting things about this is you’ll be able to take some of the dry matter and some of the alcohol and basically create your own beer. If you don’t want a stout and you don’t want an IPA but you have the two powders, you can mix them together and make a black IPA instead. And you can make it to your desired strength. It’s up to you.

Q How do you think the craft beer world will react to this idea?

TG: We consider this still in the test phase, but we’ve had a huge response just based on a few videos and blog posts. So we’re now looking at a way to do it on a bigger scale. Craft beer is a completely separate thing to this. I don’t think instant beer should replace craft beer in any way, but it’s a new thing.

Chefs can use it if they’re doing a dessert and want the powder to put on top of ice cream or something. You can get a chocolate beer or whatever. It’s got a lot of potential. We took a flight to Manchester the other day and made the first instant beer in the plane. Because obviously you can’t bring beer onto the plane with the security rules. Now it’s actually possible to drink some version of craft beer on the plane. Beer weighs a lot, as well. If you climb a mountain with a six-pack, then you have a lot of dead weight. But if you use instant beer instead, you might be able to have a beer at the top.

Q You’re obviously a long way from bringing this to the market, but is this something you could conceivably do commercially? Is the process expensive?

TEJ: It’s really expensive. If you go to the supermarket and see how much you pay for shitty freeze-dried coffee, what you pay for is the process, not the coffee. It takes a lot of energy to cool it and create the vacuum. So we’re still looking to see if it’s feasible, but it’s definitely interesting.

Q Isn’t there a chance people will associate your instant beer with that terrible instant coffee?

TG: It was the same with canned beer, right? Ten years ago if you put craft beer in a can then people would think you were a big commercial brewer, but now people have realised there’s a lot of positives to canned beer. It ships better, it keeps for longer. Packaging matters in the world of craft beer.