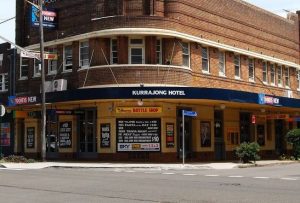 An Inner West pub that has been closed for around two years is undergoing a significant restoration and refurbishment.

The Swanson Hotel in Erskineville is being renovated by MBC Hospitality Group, which was founded by husband and wife team Clare and Brett Davis in partnership with Michael Hayward. The heritage venue is due to reopen in late July under its original name – The Kurrajong Hotel, or as the locals know it, The Kurra.

The Kurra will be the Davises’ second venue – they already run Gurdys in Newtown – and will feature many heritage features that have been unearthed and restored during the renovation. These include original art deco floor tiles and wall tiles.

The couple intend to get behind the Inner West brewing scene and are installing 12 taps which will pour beers from local and independent breweries.

“We’re under no tap contracts with anyone and we don’t plan to,” says Brett Davis. “We’re very much spoilt for choice here, which is great. There will be five or six staples on the taplist, and then at least half of them will be rotating through, when we get limited releases and the like. We’ll work with local brewers and independents and showcase their stuff.

“There will definitely be variety in the fridge. We’ll open up a bottleshop, over-the-bar style. For me, it’s about coming in and trying something different. We’ll have mixed six packs.”

The ground floor of the venue has been reconfigured to open up the space and a kitchen has been introduced. The old VIP lounge has also been transformed into a family-friendly area and kids play space.

“The Kurra was much loved as an Erskineville institution for many years and we know the locals have missed their old haunting ground since it closed after being renamed and losing touch with the locals. We’re delighted to revitalise this historic venue and return it to the community as a place operated by locals for locals.”

Food will be provided by the venue’s head chef Daniel Lanza, who has worked at The Prince Hotel, Opera Bar and North Bondi Fish. The menu will feature classic pub meals with a twist.

“My passion for traditional cooking and my love of Mediterranean culture are both really evident in the dishes created for The Kurra,” explains Lanza. “While we are still putting the finishing touches to the menu, I can tell you that I’m most excited about the bowls, including the lamb kofta bowl and the grilled octopus.