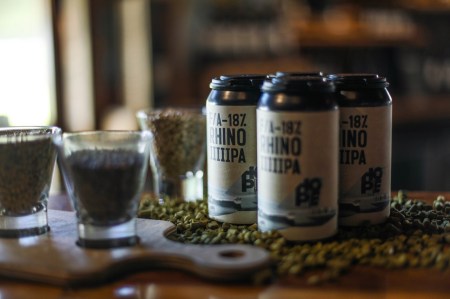 Hope Brewery has upped the stakes with its GABS Festival Beer for 2019, unveiling a truly massive 18% IIIIIPA on its social media channels last week.

Hope’s F/A-18% Rhino IIIIIPA sits firmly at the extreme end of brewing, and according to the brewery, is named after the F/A-18 fighter jets that “dominate the Hunter skyline”.

In terms of the brewing process, Hogan says that “time and lots and lots of hops,” were the key to producing the Rhino.

“We started with a Brut DIPA which was fermented out with a brewer’s yeast, at the end of this fermentation the beer was dry hopped for the first time.

“After this it gets a little different… we added a super strong wine yeast to the brew and started feeding it with grape juice concentrate. Once we got to the desired ABV and the ferment was all finished, we dry hopped the brew for a second time.”

“Dank and resinous with top notes of lemon sherbet, passionfruit, pawpaw with some sweet floral notes, the palate delivers much of the same with intense hoppiness,” is Hogan’s description of the Rhino.

“The booze and fruitiness are all pulled together by solid bitterness. The booze is noticeable but doesn’t detract from the overall experience.”

Not many IPAs can lay claim to such a whopping ABV; apart from Dogfish Head’s 120 Minute IPA – which lands between 15 and 20% ABV depending on the vintage – Hogan says “there aren’t too many others out there”.

With GABS just around the corner, festival organisers have also released details about the Festival Beers & Ciders pouring on Container A and B.

Australia’s craft breweries are up to their usual tricks for GABS 2019, with the unique festival beers stretching from a Grilled Pineapple and Smoked Bacon NEIPA by Eden Brewery to an ‘Unphogettable Blonde’ from Morrison Brewery, made with basil coriander, citrus, anise and fish sauce.

F/A-18% Rhino IIIIIPA will be pouring at all three Australian editions of GABS – kicking off in Brisbane on Saturday 27 April, followed by Melbourne (Friday 17 May-Sunday 19 May) and Sydney (Saturday 1 June).

Selected independent retailers and Hope’s Cellar Door in the Hunter Valley will also have Rhino available after GABS makes its way around the country.