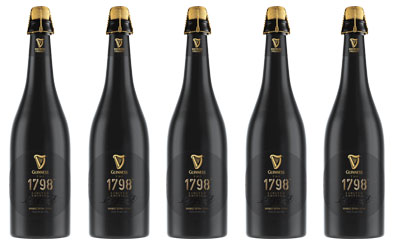 Paying tribute to the original Old Vat House built in 1798, the new release is a specially-packaged, corked and caged 750ml bottle, made for sharing.

Brewed with Irish stout malt, crystal malt and the same roasted barley and yeast used in Guinness Draught, Guinness The 1798 Double Extra Stout is dark with chocolate, vanilla and liquorice flavours. The beer is late hopped with Goldings hops for extra complexity and to help balance the sweetness, while a gentle wood aroma and flavour is the result of 217-year-old oak wood chips coming from the historic old vat house.

“Guinness The 1798 is an intensely rich, smooth double stout with a uniquely subtle smoky character,” said Michael Donnelly, one of the brewers who created the recipe.

“What makes this beer so special is that we were able to physically incorporate a piece of Guinness history into the process of the beer by using the original oak wood from storage vats in the Old Vat House. Past Guinness brewers in the 1800s used these vats to mature ‘Foreign Export Stout’ before shipping overseas, which gives the beer a unique combination of flavours including oak, raisin, burnt caramel, and dark coffee.”

A pioneer in his time, Arthur Guinness commissioned several large wooden vats that would be used to mature stout for up to 18 months before being shipped to different countries.

Recently, a carpenter working within St. James’s Gate, Eoghan Kelly began using the wood from this original vat house to create plaques for retiring brewers. When Donnelly noticed the rich aroma that these plaques gave off, he asked Kelly to prepare some of the wood to be used in the brewing and conditioning of a beer. The result was Guinness The 1798 Double Extra Stout.

There are only 2,400 limited edition bottles available in Australia, exclusively from Dan Murphy’s for $49.90. With more than 13 million glasses of Guinness enjoyed on St. Patrick’s Day last year, you better get in fast!