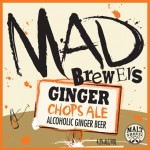 But rest assured that this brew is nothing like the sickly sweet “beers” found on shelves of bottlos the country over. So, instead of making a faux-beer the Mad Brewers set about carefully crafting ginger into their malt bill.

The resultant beer “brings you the warming glow of spicy ginger, layered on an authentic beer brew boasting a full lashing of malted wheat & barley, rounded out with the subtle addition of an aromatic Australian honey”. At a moderate 4.2% ABV and a bitterness of 12 BU, it won’t cure your cold, but it will keep you warm this winter, especially paired with a range of spicy Asian dishes – as recommended by the Mad Brewers themselves.

This limited run will be available nationally from 25 June in selected good liquor stores and on tap at the James Squire Brewhouses and Brewbars plus a number of selected bar accounts in each state.