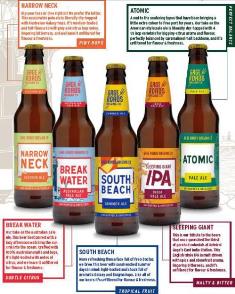 Managing director John Hoedemaker last week told investors the new beers will be complemented by the refreshed Atomic Pale Ale, Sleeping Giant IPA, Small Batch Lager and Wahoo Summer Ale, which will be available on shelves in the coming weeks.

“The refresh delivers on its goals to rediscover Gage Roads’ craft brewing credentials and communicate them to consumers, to ground the brand in a sense-of-place, unify the products into a branded family and ultimately create a platform for future sales growth and increased brand value,” he said.

“This provides Gage Roads the opportunity to strengthen its position as Australia’s fourth largest craft brand and further take advantage of the growing craft beer market.”

The brewer said first quarter FY15 sales across its portfolio improved by 16 per cent over the prior year comparative period.

Its production of Woolworths’ exclusive brands increased by 22 per cent, while contract brewing sales to other customers were up 30 per cent.

However, draught sales were below expectations as a result of “significant price competition in the low-value mainstream draught beer market”.