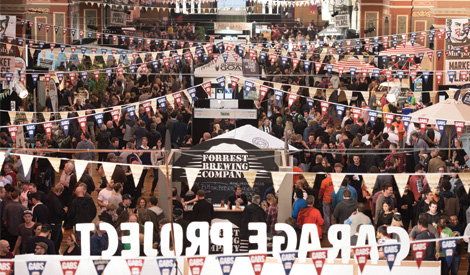 GABS Melbourne saw more than 16,000 through the doors

On the back of a record breaking three days in Melbourne, The Great Australasian Beer SpecTAPular (GABS) is set to make Sydney awash with beer for the first time this Saturday (30 May).

GABS took Melbourne by storm with more than 16,000 people through the doors, who consumed the equivalent of 300,000 taster glasses or 25,000 litres of beer and food-wise the equivalent of a whopping 12,000 burgers were enjoyed.

“We’re so excited to take this event, with all the bells and whistles, to Sydney for the first time,” said Jeffares. “We will be showcasing incredible food and 300 beers, including the creative beers brewed especially for the event. There is a demonstration kitchen, a beer ‘college’ and the entertainment is better than ever before with mind blowing circus performances, roving musicians, tap dancers and table tennis tournaments.”

For one day only Sydney beer lovers will get to experience the latest and greatest in craft beers, with 118 festival beers brewed just for the event.

“Breweries can submit any beer they like as long as they’ve never brewed it before. Some choose to brew in a traditional style, perhaps with a twist, while other use exotic ingredients and brewing processes to come up with something very creative,” said Jeffares.

Young Henrys brewer Richard Adamson says they’re making a cherry Flanders ale, “which uses fresh cherries from a local lavender farm and then we aged it for six months in rum barrels and combine it with a rich velvet stout made with raspberries.”

4 Pines brewer Leigh Smith says they wanted to create something as natural as possible so are using a technique of steeping roasted nuts and then freezing the mixture, so they can scrape off the fat, leaving “just the peanut goodness”.

Named as one of the top 20 beer festivals in the world by Beer Connoisseur Magazine, GABS will be held at Exhibition Hall, Australian Technology Park in Eveleigh. There are two sessions 12-5pm and 6:30-11:30pm and tickets are selling fast so pre-purchasing is recommended, to book tickets click here.