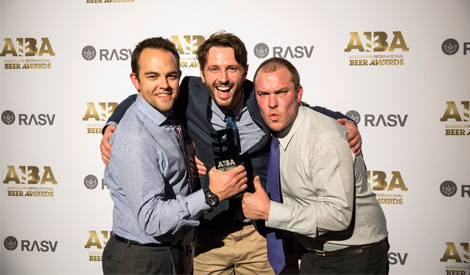 Big winners at the Australian International Beer Awards (AIBA), 4 Pines Brewing Co. and Mountain Goat Beer, have both proclaimed the strength of the Australian craft beer industry and its growing momentum, on the back of their awards.

“It feels a bit surreal really. But very exciting and great to see the lift it gives all the Goats,” said Mountain Goat Beer co-owner Cam Hines. “We sometimes joke that we started 10 years too early, because there were very few people who understood what we were trying to do in the early days. But it’s fantastic to see the way Australians are now embracing good beer. I think the momentum craft now has will only keep building.”

This was a sentiment echoed by 4 Pines Brewing Co. founder Jaron Mitchell, whose Sydney brewery opened in 2008.

“A craft beer industry hardly existed seven years ago. There were lots of brewers, however a market place to get our beers out was very thin,” Mitchell said. “Now there are about twice as many brewers and this market place is thriving. Consumers and retailers squarely have ‘craft beer’ as part of their vernacular, with what now seems like an unlimited thirst (pun) for local excellent beers. It’s an exciting industry and an exciting time to be involved.”

“We have been extremely impressed by the high quality product coming through, and 2015’s pool of entrants has not disappointed,” said head judge, Warren Pawsey.

4 Pines Brewing Co.’s win in the Champion Large Brewery category is particularly impressive considering it was up against much bigger brewers with greaterresources. So just how does it feel to win such a prestigious award?

Jaron Mitchell put it this way: “Not quite as good as male hand model of the decade or the one time my Nanna said I was really handsome, but this is still a very special achievement and something to celebrate. We will finally have made daddy proud and he’ll have to listen to what we have to say. He loves our sister the most, so even if for a day he gives us some respect, it is now all worthwhile.”

Mountain Goat’s Hines reflected that while winning Champion Australian Beer is a huge achievement, so too is keeping a business running for 18 years.

“It does feel like a very significant achievement. I think just keeping Goat on the rails for 18 years has in itself been a big thing. Dave and I continue to be challenged but continue to love what we‘re doing. Mountain Goat has sort of mapped out my life in a way,” he said.

Held in conjunction with Good Beer Week, the 2015 AIBA attracted a record number of entries with more than 1,700 submissions from 344 exhibitors, across 35 countries.

Full details of all the AIBA award winners are listed below.