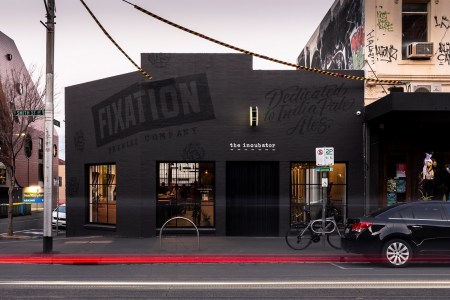 Fixation Brewing Company has opened its ‘Incubator’ tasting room on Smith Street in Collingwood, calling it the street’s “freshest and hoppiest venue”.

Fixation is Australia’s only IPA dedicated brewery and the Incubator allows the brewers to create and hatch their hoppiest ideas and then share them over the bar for all to try. The tasting room, which opened on Wednesday, will feature Fixation’s core range of award-winning beers as well as other special and exclusive brews, such as The 86 IPA and Easey Street IPA, served fresh from the tanks.

Speaking about the opening, Fixation said: “For those wanting to know more about craft brewing, this is the place to visit. Tours aren’t necessary with the bar nestled snug against the brewery. Enjoy your beers mere metres from the shiny steel tanks – any closer and you would be a part of the brew team. Any questions can be expertly and happily answered by the Fixation team, who are all self-confessed IPA fanatics.

“From the flagship Fixation IPA, an award winning, modern-day classic, to the beloved zesty Squish IPA through to Obsession, the 4.6% session IPA that doesn’t compromise on flavour. Fixation’s Incubator tasting room is Melbourne’s latest home to a range of fresh beer options.”

Incubator will also cater for foodies, with visitors welcome to take advantage of the wide-range of local food options and bring a meal into the bar, or order in using their preferred food ordering app.

In 2018 Fixation was awarded the Excellence in Consistency trophy at the Australian International Beer Awards, and in 2017 the brewery was recognised by the Independent Brewers Awards as the ‘Champion Medium Brewery’.