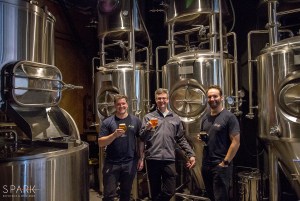 Neil Mills founded Burnley Brewing in November 2017, after kitting out his venue with Spark Brewing Equipment. Beer & Brewer talks to him about his experiences so far.

How long have you been brewing?

I’ve been brewing since I was 18 or so. I started out using some pretty average kit, getting more and more serious. And then after a couple of years doing brewery equipment installation for other breweries, I decided that it was time to start one of my own. In November 2017, we opened the pub.

What were you looking for in brewing equipment?

We wanted to have the flexibility to be able to make a range of different styles. We wanted to brew a lot of beers and have a rotating selection – a new beer out each week, brewing small batches. We’ve got 14 beers on tap at the moment.

What equipment did you buy?

We’ve got a Spark K500 stacked brewhouse and four 1,000l fermenters. And we have eight product tanks from which we serve the beer. We’ve a couple of beers we pour from the cool rooms as well, and that makes up the other six lines. But the whole idea was to have beer fresh from the tank. Keep it simple. It makes the beers fresher. Heat, light, oxygen and time are big enemies of beer quality and this approach avoids all of them, serving them straight from the tank. The first time you see the beer is when it hits the glass. It’s never been fresher.

How were Spark during the purchase and installation?

They were great. They did what they do well. They were very easy to work with. They helped with more than the equipment – the drains, the extraction and utilities as well. They’ve got a wealth of knowledge on how to go about those things and end up with a good result.

We wanted to be flexible and Spark worked with us in the design. Our tanks are stacked on top of the fermenters. We’ve got tanks brushing the ceiling. It was made for purpose.

What have you got now?

Installing a brewery in a restaurant was a bit more evolved. We’re didn’t want to be a hospitality restaurant with a brewery, we wanted to incorporate the brewery in the venue like a brewpub. You don’t have to go on a brewery tour. You can sit at the bar, say g’day and have a conversation with the brewers and taste some stuff. It takes the formality out of it.

Would you recommend Spark to other brewers?

I would definitely recommend them. It’s quality stainless steel with a digital control system and remote access. That’s what we wanted, and they’ve definitely delivered.

You get a lot of benefits from shopping local. For a start, you’ve got someone to call and consult on things as they are. There’s also much more accountability. The standards are all done to Australian code and they take responsibility for that. If you buy from overseas, that onus is on you. I think a lot of people are unaware and don’t know if they’re compliant. But as soon as you start staffing the brewery, you need that compliance.

Spark have been generous with extra parts and hardware that we’d forgotten to order. They’ve also been more than happy to come down and try a few beers! It’s stellar hardware, hoses and that kind of thing. We haven’t had any problems with our brewhouse.

What are your plans for the future?

The original plan was not to distribute our beers, but we’ve had lots of people asking. We’re chokka block at the restaurant. So we’ve just popped in a second brewery in a warehouse to do our volume beers. Again, we used Spark kit, but it’s a bigger brewery. That’s been open a couple of months over there. We brew 2,000l a day there and we have six 2,000l fermenters. That’s where we brew our Pale Ale and our Vienna Lager. We’ll be canning them soon. We’re going to order some more fermenters so we’ve got enough beers for summer. And we’ll turn to Spark to help and guidance in that indeed.

What three words would you use to describe Spark?