By ashailer on October 29, 2015 in Beer & Breweries, Brewer Interviews, Industry 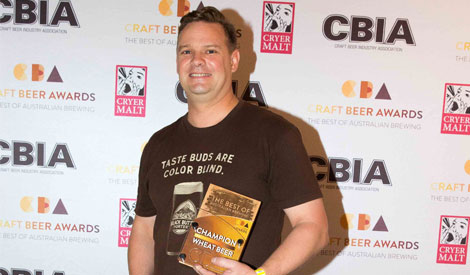 Feral Brewing Company took out Champion Craft Beer at the recent Craft Beer Awards for its sour brew, Watermelon Warhead, cementing the rise of sour beers in Australia and leading to the brewery finally confirming it will bottle the popular brew.

“It’s humbling. We strive pretty hard day to day for quality beer and it’s a good sign that we are keeping in the right direction,” Brendan Varis from Feral Brewing Co. said of the win.

“We are out there like a lot of craft brewers, saying that we make beer that we love, that we like to drink ourselves and we have personal respect for. This particular beer absolutely personifies this, along with the critical work we put into perfecting this beer. We’re really proud and really appreciative to receive this award.”

Also crowned Champion Wheat Beer at the awards, Watermelon Warhead is a light sour German wheat beer. A time-consuming brew to craft, Feral has been working on Watermelon Warhead since 2012 and while it has only ever been available on tap, the brewery is now looking to bottle the award-winning beer.

“Yes, I would like to think it will happen sometime next year,” Varis told Beer & Brewer.

“It’s more time consuming than hard. We ferment in used chardonnay barrels inoculated with lactobacillus, then age for about three months adding roughly a tonne of local swan valley watermelons. Working with bacteria and barrels is an entirely different beast that took a few years to develop our process. Plus juicing a tonne of watermelon through a home juicer isn’t fun.”

Feral is also looking to expand its focus on sour beers with a new barrel room in the works.

“There will be a new barrel room in the Swan Valley for 800 barrels focusing on sour beers in the very near future,” Varis said.

“I do think there is more of an acceptance for sour beers but I still think it’s early days for Australia.”

“It has taken a while, but we are finally seeing the rise of sour beers in Australia,” he said.

“We are really excited to be giving this award to such a unique and flavoursome beer. We hope it inspires more people to get out there and try more locally-produced craft beers.”

It was a successful night for the West Coast with the hop heads from Fremantle, Monk Craft Brewery Kitchen, also coming up trumps and winning Champion Small Brewery.

“This room is filled with many of my heroes, so to get this award tonight is really an honour,” said Craig Eulenstein from Monk Craft Brewery Kitchen.

Two Birds Brewing Co in Springwood, Victoria; won Champion Large Brewery. Australia’s first female owned and run brewery is the brainchild and passion of Jayne Lewis and Danielle Allen, who grew up and met in Perth over 16 years ago, when after a two-week tour of the West Coast of the United States in 2010, they embarked on their dream to own and run a brewing company.

“There were 91 breweries that entered this year’s awards with over 380 different brews,” said David Cryer of Cryermalt, the presenting partner of Craft Beer Awards. “There is a wealth of top talent right here in our backyard; and it is an exciting time to be supporting such a booming industry.”