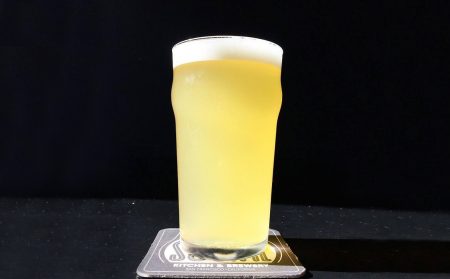 Brewers and craft beer enthusiasts are always on the lookout for the next big thing in beer. After the rise of the New England IPA, many wondered what the next take on IPA might be. Brut IPA may well be it. In our Winter issue, prompted by a reader’s question, our US correspondent John Palmer had a look.

Question: Dear John, I have been reading about a new IPA style that is hitting off in the US – Brut IPA. I am wondering if you can let us know about the style and what it is like? Do you think it could take off like NEIPA? Also, would you be able to help me with a recipe? Cheers, Nat

It seems like you can’t turn around without a new IPA beer appearing, and many times they are simply an extension of what’s been done before under a different name. But very recently, a new kind of hop forward ale was introduced by Social Kitchen Brewery in San Francisco, and it seems to be a genuine new style. Whether it lasts as long as some of the other types of IPA like Black, Red, Brown, White, and New England remains to be seen.

This new style is the brainchild of brewmaster Kim Sturdavant, and it shares characteristics of both classic West Coast IPA and New England IPA. The innovation comes from the addition of enzymes to the cold side of the brewing process, to produce a much drier beer, similar to Champagne sparkling wine.

Interestingly, sparkling wine is basically wine that has been primed and bottle conditioned. The descriptor, Brut, is used to indicate how much residual sugar is left in the wine after secondary fermentation, defined as being less than 12 grams per litre. This is as far as the sparkling wine similarity goes as Brut IPA doesn’t contain any wine or grape juice, it is simply a highly attenuated, late hopped IPA.

The idea for this beer grew from Kim’s desire to produce a lighter, crisper IPA, similar to the extra pale ales that breweries like Alesmith (San Diego, CA) produce. The base malt for Brut IPA can be either pilsner malt, pale ale malt, or neutral American 2 Row. The malt bill also uses about 25% of wheat, corn or rice to thin the barley malt character and body of the beer. This shifts the hop balance forward without increasing the IBUs beyond the typical range for a pale ale, typically 30-45.

Kim took this concept one step further by introducing alpha-glucosidase enzyme at the end of fermentation to break down larger sugars and decrease the final gravity to near 1.000. This enzyme is part of the amylase group and is naturally present in malt, but usually in small quantities, and therefore usually doesn’t have much effect on the sugar profile of the wort. It works by nipping off single glucose units from the ends of the starch chains, similar to beta amylase, although beta amylase nips off two glucose units, otherwise known as maltose. In summary, the malt character of this beer is pale, light bodied, and dry.

The hop character of the beer shares a lot with the New England IPA style, or hazy/juicy IPA as they are now referred to in competition. The hops are all whirlpool (hot steeping) additions, emphasizing the hop flavors and aromas without contributing as much bitterness as you expect in a classic IPA. A whirlpool hop addition is where the hops are added to the hot wort after the boil, when the heat is turned off. The stipulation that the hops are not boiled in this style will result in a moderate hop polyphenol haze in the beer, but not as overt as in New England IPA. The hops of choice are citrusy American varieties or any of the newer hop varieties with predominately fruity characters. Anything from Citra, to Mandarina Bavaria, Huell Melon, to Riwaka and Galaxy.

An American ale yeast, such as California ale, is a critical aspect of this beer. It should be clean, and lightly fruity.

The water for this style should be generally low to medium in mineral levels with a balanced sulfate to chloride ratio. It is a very pale beer style, so the water alkalinity should be less than 50 ppm. The calcium level should be low to medium, generally in the 50-100 ppm range. Sulfate and chloride should both be about 50 ppm. Your mash pH should be between 5.2-5.4 for best results.

And, last but not least, there is a secret ingredient – alpha glucosidase. As mentioned earlier, this enzyme is part of the natural saccharification process, and it makes single glucose sugars, increasing the fermentability of the wort. It is important to note that this enzyme is different to other (probably more readily available) amylase enzymes on the market. Additional alpha-amylase will not enhance the fermentability of the wort. It might seem that you could mimic the action of glucosidase by substituting refined sugar, such as corn sugar or sucrose, for some of the malt. Unfortunately, it is not quite the same, because anytime you decrease the base malt, you are decreasing the malt flavour. I just don’t see any good alternative other than using the glucosidase enzyme to achieve the characteristics of this style.

So far, the enzyme has always been added to the fermenter towards the end of fermentation, after the yeast has been harvested from the cone. The reason for adding there is that if the enzyme were added to the mash, it could (potentially) turn all of the wort sugars into glucose and substantially change the beer flavour. Adding it at the end of fermentation reduces the amount of glucose that is fermented and has a much smaller impact on beer flavour.

The drawback of using the enzyme on the cold side is that it is not denatured by higher temperature at the end of the mash or during the boil, and will carry over into the beer, where it may continue to work. Therefore it is important to keep the beer cold after fermentation and carbonation to avoid the potential of bottle bombs. Keeping the beer cold will minimize the enzyme’s activity, as well as the yeast activity to ferment the new sugars.

The enzyme is probably available from several sources, but the product that Social Kitchen Brewery uses is Amylo(tm) 300 from BSG Craft Brewing Supplies (Shakopee, Minnesota, USA), at a suggested usage rate of 2 millilitres per hectoliter (100 litres). Hit up your local homebrew store and I am sure they can get a hold of some for you.

For a couple of Brut IPA homebrew recipe ideas from John, subscribe to Beer & Brewer here.