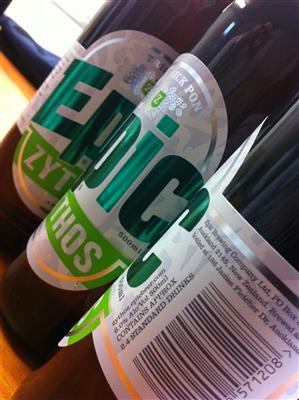 Zythos is the Greek version of an Egyptian word for beer. It’s also a new hop blend from hop supplier, Hopunion in the USA. So it’s also an appropriately ‘epic’ name for the new brew by the NZ-based Epic Brewing Company.

Their new Epic Zythos IPA is a 6.0% ABV beer that uses the best of this new hop blend to create what owner/brewer Luke Nicholas describes as “a fresh hop aroma of citrus and orange peel.” The copper coloured beer uses a large proportion of English Munich malts and is further described by Nicholas as having “a sweet, nutty malt sweetness with a dry, zingy finish and a long lingering bitterness which is carried with a fresh, citrusy hop flavour.”

After conquering all in 2006 with Epic’s initial release being crowned the Supreme Champion Beer of New Zealand and winning accolades nearly every year since, this talented brewery’s latest release is sure to cause a few waves in the market. See here for a more detailed analysis from Neil Miller, NZ editor-at-large and respected beer blogger.