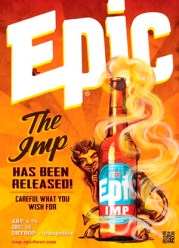 Brewed as a session IPA, Epic IMP carries a relatively small 4.7%ABV and is generously dry hopped like an IPA (it is more dry hopped than the Epic Armageddon IPA).

When poured the aroma hits you with sweet ripe summer stone fruit and citrus as you look at its brilliant pale copper colour. The flavour is of fruity citrus peel intertwined with a juicy caramel note, which finishes with a sharp but brief slap of bitterness. It drinks as though it’s much bigger than a responsible 4.7%ABV, due to the malty body and the vibrant hop intensity.

Epic beers have continuously grown in flavour, intensity and alcohol volume since exploding on the beer market in 2006. The range includes Epic Pale Ale 5.4%ABV, Armageddon IPA 6.66%ABV (a multi trophy winning IPA), Hop Zombie 8.5%ABV and Lupulingus 9%ABV best described as a brutal assault on your palate, for only the bravest amongst us.

With the ever increasing challenge of brewing the next IPA even bigger than the last, brewer Luke Nicholas decided to take on the scary task of brewing a beer that was sub 5%ABV but still keep the big hop aromas and flavours that Epic has become famous for around the world.

There has been speculation on what IMP stands for, such as ‘Imperial Miniature Pale’, ‘Indian Midget Pale’ or even ‘Internet Mana Party’. It’s simply just ‘Imp’. When looking for a beer name, it had to be able to describe a lower alcohol beer, while also still being EPIC.