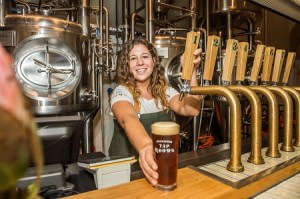 Endeavour Brewing Company has raised 183% of its minimum crowdfunding target, with shareholders coming from across Australia.

New shareholders raised $558,100, while existing shareholders privately raised an additional $695,000. Managing director Ben Kooyman is glad to have gotten above the minimum as he seeks to implement the company’s three pillar strategy.

“We’re definitely still sticking to our strategy,” he explains. “Continuing to push wholesale – we’ve just launched some new products and we’ve got a couple in the pipeline. Then we’re starting to spread a bit further than our traditional metro Sydney base.

“Second is hospitality – we’ll be looking for another brew bar site to complement the one in the Rocks.

“Thirdly, our production ambition is certainly there. It was a big window that we had, but now we know where we stand, we have to do the numbers and speak to other partners in that project.”

The entry level investment for Endeavour was $100, but one investor provided $100,000. While all are now officially shareholders in the business and part of the ‘Endeavour Crew’, the brewery has created three levels of benefits depending on investment.

“From $100 to $900 they get a cap, a key ring and some discounts,” says Kooyman. “The next level between $1,000 and $4,900 they get another level of benefits, and then $5,000 and above is the top tier. They get more merchandise, deeper discounts on beers and new releases and first access to beers.

“Everyone gets beer on their birthday and we’re going to do an annual shareholders brew as well. We’ll do the first one of those after the financial year end.”

Alongside Black Hops, Endeavour was the first Australian brewery to go down the crowdfunding route – although there are international successes stories everywhere, from BrewDog to Parrotdog – and Kooyman is happy that as flagbearers, they have seen success, with around half of shareholders now based outside New South Wales.

“I think both us and Black Hop can certainly hold our heads high. It was a big risk  especially or us.

“It’s not just the money. The asset that we have of over 600 shareholders around the country is really powerful for us and is something that we’ll treasure and keep happy in the long term.

“We have great support in each of the states and territories. So we are now truly a nationally owned beer company. They are all full ordinary shareholders same as me and they’re just as valuable. We’re excited to meet their desires as an owner and a beer company.”