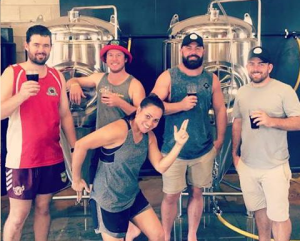 Chris Brown and his wife Corrina have launched Beaver Brewery in Darwin.

Brown, a massive Manly Warringah Sea Eagles NRL fan who named his brewery for Sea Eagles player Steven ‘Beaver’ Menzies, had been homebrewing in Darwin for about 15 years, but it was time spent in Hobart that got him on the road to founding his own brewery.

“I was lucky that my wife got a job down in Hobart and I took 12 months long service leave (from the army) and I was a stay-at-home dad and looked after my son,” he explains. “And then I volunteered in Captain Bligh’s brewery in Hobart. I was lucky enough to work Steve Brooks and got to meet all the brewers and it’s quite a great craft beer community down there.

“They took me under their wing, helped me out with everything and gave me contacts. I still talk to them now weekly. My wife and I came back to Darwin and started everything here.”

The brewery is made up of four 600L fermenters, allowing Brown to make smaller batches, which suits the Darwin craft beer scene for the moment.

“It’s not massive, but it’s starting to change,” he says. “The scene wouldn’t be able to handle too big a brewery.

“It’s quite a transient place and it’s hard to get Darwin locals who have been living here for 50 years to change, but there’s a lot of people, as craft beer gets bigger in Australian and around the world, who are willing to try this stuff. It’s working quite well.”

Once Brown gets his liquor licence – there are more boxes to be ticked in Darwin compared to the rest of Australia – he expects to open the cellar door every other Friday, perhaps more often during the tourist-heavy dry season.

“We’d try to make it a bit of an event. We worked out that we can have a family and a career and still do everything together. We’re a small family brewery. We can make small batches and craft anything we feel like. It’s exactly what we need up here. There’s going to be a lot of beers we’re not going to release to pubs. A lot will just be for the cellar door.”

At present, Beaver Brewery brews a pale ale, a brown ale and a lager, with a hoppy lager and a ginger beer on the way as part of a series of seasonal releases.

“We’ve got a few other beers,” says Brown. “I love dark beers so we’ll make a stout and a porter and beers that we’ll release monthly or ever two months. If it goes well then we’ll look at doing a bigger batch. A lot will be prototypes. I love brewing beer and the more you brew the better you do.”