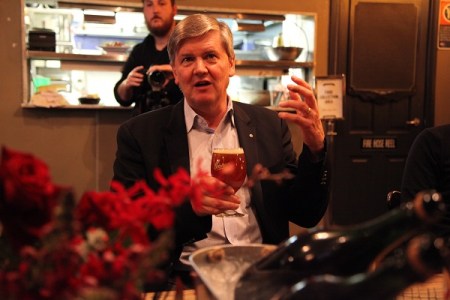 Based in the UK, IBD currently has more than 5000 members across 102 countries and Dr Cooper will serve a one-year term as President, after being appointed at the IBD’s annual general meeting last month.

He is the first Australian to lead the organisation since Bill Taylor (Lion, 2004-05) and Adrian Gardner (CUB, 2001-02) served as Presidents of the Institute and Guild of Brewing, an earlier iteration of the IBD.

Dr Cooper said he was delighted to accept the position.

“The world’s brewing and distilling industry is undergoing an enormous surge in interest and growth with the emergence of the craft brewing sector,” he said.

“Craft breweries and distillers are opening across the world on a daily basis and this has led to the situation where demand for qualified brewers and brewery workers has reached unprecedented levels.

“The IBD is about improving the education and understanding of everyone involved in or entering the industry and helping to underpin the quality of the beers being developed.”

The Chief Executive Officer of the Brewers Association of Australia, Mr Brett Heffernan has welcomed the appointment.

“Dr Cooper’s election as President of the IBD recognises his passionate commitment to industry excellence and his expertise as a master brewer,” he said.

“It also underlines Australia’s position as a world brewing leader.

“Tim is a living legend, respected by all across the entire alcohol industry and he brings with him a wealth of experience to the leadership of IBD along with a dedication to excellence that will serve the industry well into the future.”

The IBD oversees training across all levels of the brewing, distilling and cider industries, from non-production staff through to Master Brewers and Master Distillers and Coopers currently has several employees undertaking IBD courses.