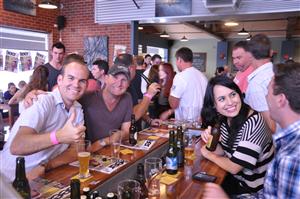 Readers enjoying some brews at our 20th Issue Party in Wagga

We may have mentioned that Issue 21 was our Fifth Birthday Issue, well now were having a party. But not just any party! Come along on July 17 to the East Village Hotel in Balmain to help us celebrate five fabulous years of beer and to toast the next five years of good brews.

For those that have attended parties before, they’re always great bashes, but this one is extra special. With a little help from our brewing friends we’ve put together a fabulous five-course Beer Degustation – yep that’s one course for every year we’ve been kicking – with each course matched to not one but two stellar beers from some of our favourite local breweries such as:

We’d love to meet you and your mates and have a chat about beer and the mag, along with enjoying the great food and brews of offer. So make sure you get in early to book your tickets… they won’t last long with a menu this good and beers this fresh.

The Issue 19 party in Tassie