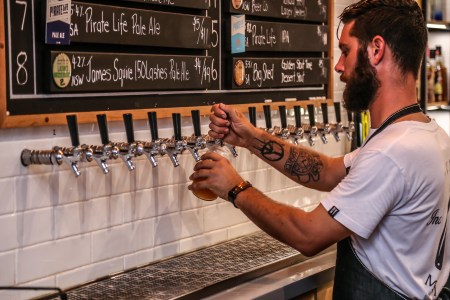 Darwin and the Northern Territory certainly isn’t the first place you think of when it comes to craft beer. However, the tide is slowly turning, with a number of small breweries opening in recent times and an increasing number of craft taps popping up in bars and clubs around town.

Historically, the top end has been beholden to the big breweries, who can afford to send beer to what is one of Australia’s most geographically isolated places. Combine the high costs of freight with a hot and sticky climate and it’s easy to see why craft beer and brewing may not have kicked off quite like it has in other parts of the country.

However, while XXXX Gold and Great Northern are still ubiquitous around Darwin, in 2017 it’s now very possible to get your hands on a cold glass of something a little more exciting – if you know where to go.

One Mile Brewing Company has been supplying venues in Darwin with kegs of locally brewed beer for a few years already, going commercial in August of 2014.

Local lads Bardy Bayram and Stuart Brown started One Mile in 2012, and have been growing ever since; soon they’ll move into a new location where they’ll aim to take the next step and get their beer in bottles.

With three beers in their core range – 4:21 Kolsch, RDO Bright Ale and Otto’s Red Ale – as well as a Pink Lady Cider and a small number of seasonal releases, One Mile’s beers can usually be found in about 10 to 12 venues around town, with Brown telling Beer & Brewer that the craft beer scene in Darwin is only growing.

“I think it’s born out of what’s happening down south, with publicans and owners keen to have their own taps so they’ve got a bit more freedom to pour what they want. We’re seeing a lot of craft beer coming up and that’s giving us the opportunity to get our name out there.

“I think it must be that the local tastes are changing as well, which is a good thing.”

Given the climate, Brown said that lighter beers are the most popular with Darwin’s drinkers, and while that’s slowly changing as locals get the taste for something with a bit more flavour and character, that fact has dictated the beers that One Mile brew.

“The Red Ale moves reasonably well but it’s definitely slower than the Bright Ale and the Kolsch – the cider moves pretty well too,” he explained. “I think it’s partly the nature of the climate, people don’t really feel like drinking a heavy beer and might not be used to those types of beers as well.

“I think a lot of people see a dark beer and assume that it’s going to be a big heavy beer, but of course that’s not necessarily the case.”

The climate also makes the brewing process in Darwin quite difficult; Brown explained that the biggest challenges are the temperature and humidity.

“Keeping our grain dry with all the humidity and moisture in the air, keeping our tanks cool and cooling after the boil, those are the types of things that are the hardest to get right – it’s a costly exercise and it’s hot work as well.”

In terms of pubs and bars in town, Lola’s Pergola, The Precinct, Stone House, The Deck Bar and Rorkes (to name a few) all pour One Mile’s brews as well as a selection of craftier beers from around Australia.

However, it’s the new kid on the block – Six Tanks Brewing Co – that’s really making waves in recent times, having also found a way to avoid many of the brewing challenges that Darwin presents.

Opening in late November last year, owner and brewer Tess Petho said the brewpub has been really well received in the eight months that its been operating; in addition to the six tanks in which they brew their own beer – currently their core range consists of a pale ale, an IPA, a Kolsch and a Pilsner – they’ve also got 16 guest taps that showcase beers from around Australia and the world.

“We try to focus on predominantly Australia craft,” she said. “We’ve had 4 Pines, Modus, Pirate Life, which has been a massive hit for us – you name it, we’ve pretty much had it.”

“We’ve had great seasonal beers like our Summer Ale which is just smashing all the goals, as well as one-offs that we’ve brewed and beers from America as well. While we’ve still got our mainstream craft, we don’t carry anything mainstream on tap – no XXXX, no Pure Blonde, there’s five SKUs in the fridge in bottle but that’s it.”

The Six Tanks beers are brewed using the SmartBrew system, which allows the brewery to avoid many of the issues presented by the climate and also allows them to open right in the heart of town. Wort is produced off-site and they source their hops mainly from Hopco and Bintani.

She describes freight, however, as “the killer, and logistically the thing that holds it back. We’ve got the extra built in of having to get the kegs up but also get them back. Kegstar still don’t have a distribution point in Darwin but out of good faith we always return our kegs back to Adelaide for them.” 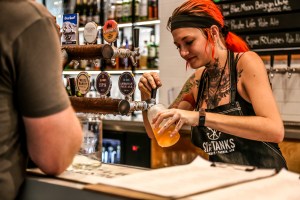 “Between Lola’s Pergola, Precinct and ourselves, there’s a lot of us and probably others that would love to grow the craft industry up here, but it really is that cost factor of the logistics and freight that holds people back – so c’mon Kegstar!”

Petho also has a different take than Brown from One Mile on the local preference for lighter beers: “The Twist & Stout from Yenda has been really popular, and we’re smashing through the Pirate Life Stout too. White Rabbit Dark sells well, and Golden Stout Time from Big Shed – that’s requested so much that we keep it in bottle now too. Whatever we put on tap in here, it just goes.”

“I think you’ve got to remember that Darwin is made up of a lot of people from interstate, with lots of fly in, fly out workers. People also get transferred here from other states with government jobs, so people have been waiting and waiting for a place like Six Tanks.

“There’s a lot of Americans here too, so Samuel Adams and Blue Moon go well, but Americans love their IPAs and their big beers so it doesn’t matter if it’s not American – they love Pirate Life for example.

“When we first opened we opened with the Pirate Life IIPA on the back wall, dark beers too and everyone was like ‘wow you’re game – it’s Darwin!’ But it was sink or swim, let’s see how it goes and everyone just snapped it up.”

There’s even some craft beer movement outside of Darwin. The Purple Mango Café and Brewery is around 50 minutes south of town along the Arnhem Highway, and in addition to its beers, is home to the biggest wood fired pizza oven in the Territory.

Opening in May 2016, the brewery offers tasting paddles as well as takeaway bottles of its specialty brews; top beers include the Mango Mango fruit beer, Monsoon Belgian Pale Ale and Lightning Bolt Steam Ale – all in a classic Territory bush setting.

Though the craft beer scene is still in its infancy in Darwin and the NT, breweries such as Purple Mango, One Mile and Six Tanks are right on the frontier – and through their hard work, are forging the way for a beer trail that will soon stretch right around Australia.