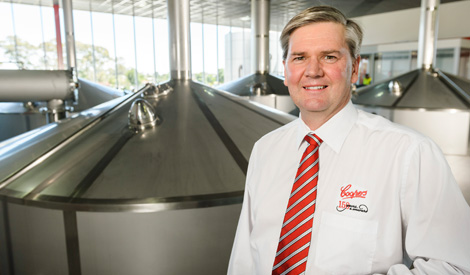 Coopers Brewery is set to brew and distribute one of America’s leading craft beers, Brooklyn Lager from 1 August.

Coopers and New York-based Brooklyn Brewery, have reached an in principle agreement for Coopers to brew and keg Brooklyn Lager at its Regency Park facility and distribute the beer in keg, bottle and can formats across Australia and New Zealand.

Distribution would be undertaken by Coopers’ distribution company, Premium Beverages, which would also import and distribute other variants in the Brooklyn range as part of the agreement.

Coopers’ managing director Dr Tim Cooper said final contracts had not yet been signed, but both parties were working towards an agreement.

“Brooklyn Brewery is regarded as one of the leaders of the American craft brewing movement,” Dr Cooper said.

“Its flagship beer, Brooklyn Lager, is a high quality, all-malt beer, which would fit well into the Coopers portfolio.

“While Brooklyn Lager has previously been sold in Australia, its distribution has been patchy. This agreement will overcome those problems and we believe the beer will quickly establish itself in the Australian market.”

Dr Cooper said he and Coopers sales and marketing director Cam Pearce would be visiting Brooklyn next week to finalise arrangements.

Brooklyn Brewery was established in 1988 by former Associated Press Middle East correspondent, Steve Hindy and banker Tom Potter. Today, the brewery is the 11th largest craft brewery in America and exports to 29 countries around the world.

Dr Cooper said Premium Beverages had been looking for an American craft beer to help round out its international portfolio, which includes Carlsberg, Sapporo, Kronenbourg 1664, Kronenbourg Blanc and Mythos.

“Brooklyn Brewing is highly regarded for the quality of beer it produces and will help strengthen this portfolio,” he said.

The new agreement was first revealed over the weekend in a statement by Brooklyn Brewery’s current distributor Palais Imports.

“Coopers and its distribution arm Premium Beverages have won the rights to brew Brooklyn Lager under license and distribute Brooklyn beer in Australia,” Palais Imports said in the statement.

“It’s a direction that we at Palais Imports find difficult to reconcile. It does not fit with our core craft beer values, however this is the path they have chosen so we wish Brooklyn Brewery, Coopers Brewery and Premium Beverages all the best with the endeavour.

“Palais Imports has relished the opportunity to introduce and establish a brand like Brooklyn in Australia. It is from this solid foundation that Brooklyn now push further into the mainstream beer market, alongside other great brands like Mythos, Sapporo and Thatchers.

“At Palais, we push further into our future with our existing international brands that continue to grow strongly. As for new and exciting brews, and breweries, to further complement our portfolio, stay tuned over the coming months.”