“We’ve made 31 different brews this year from saisons to stouts,” said Watkins.

To celebrate a successful year, the brewery launched four new beers during celebrations at the brewery. The first was a strong Scotch ale named ‘Blow Your Bagpipe’, which is the third in a series of historical beer styles to be produced by Watkins in collaboration with beer historian David Hughes. Following David Booth’s brewing notes and descriptions in his 1829 publication the Art of Brewing, Blow Your Bagpipe is a strong but smooth, malty, gently hopped pale ale traditionally brewed for a longer duration and lower temperatures than brews of the 21st century.

The second beer, launched at a special members function on Sunday night, was a big, bold 15% ABV dark beer called Descent 15. Containing eight different malts and seven different hops, Descent 15 is wild fermented and even has seven litres of Aberlour Scotch Whisky in the batch.

“I believe I may have created a whole new beer style,” Watkins said of the beer. “There’s a secret ingredient making this brew, which I’m calling a black imperial barley wine”.

The final two releases were a dark India pale ale named ‘Black Tyre’ (6.6% ABV) and ‘Dark and Sour’ (4.7% ABV) described by Watkins with a laugh as a “cross between dark jelly beans and a hint of Lemon Warheads”. Black Tyre has a hoppy push from US Centennial, Simcoe, Citra and Mosaic hops, while Dark and Sour has roasty sweetness followed by subtle leathery sourness from wild yeast.

“We’re immensely thankful to the Canberra population who’ve whole-heartedly embraced our brews, including the bent ones, over this past year,” said Watkins. “Thanks to this support we have big plans to bring our brews to all of Canberra in many different new and exciting ways over the next year. Stay tuned for the next chapter!”

To celebrate the launch of Blow Your Bagpipe, the BentSpoke team and beer historian David Hughes recreated what’s believed to be the earliest photo of people drinking beer in the world – a shot from 1844 of three gents drinking Edinburgh Ale. See below. 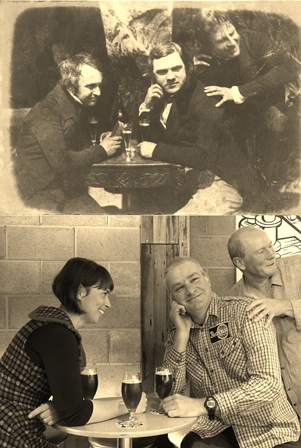