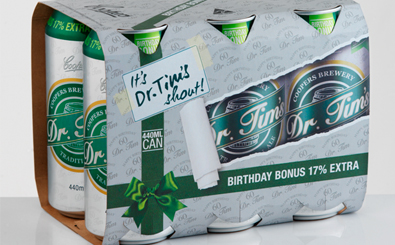 Coopers is currently rolling out 20,000 cases of Dr Tim’s Traditional Ale in the 440ml can format, which will we the first time Coopers has released a 440ml can.

“Members of Dr Cooper’s brewing team suggested that a special edition can of Dr Tim’s would be a suitable recognition,” said Coopers’ national sales and marketing director Cam Pearce.

Dr Tim’s Traditional Ale was first produced in 2004 as an experiment to see whether Coopers’ ales, which undergo secondary fermentation, could be successfully packaged in cans.

It’s been a busy month for Coopers, which has just released a national campaign for its Sparkling Ale designed to underline the history, quality and consistency of the beer.

“Our commitment to quality and consistency hasn’t changed for over 150 years,” Pearce said. “We’ve never compromised on quality, and never could, and we wouldn’t change a thing.”

To take a look at the campaign, check out the new Sparkling Ale cinema advertisement below.