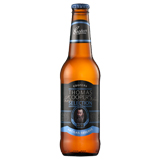 Given Coopers’ history of bottle-conditioned ales that don’t undergo pasteurisation, the decision to apply that knowledge to producing an unpasteurised lager-style beer seems like a logical step – and one that presented a challenge to the brewers.

“[This beer] reflects the skill of the brewers who have pushed the boundaries of the ancient art of beer-making to create an unpasteurised product with the freshest taste possible,” said Dr Tim Cooper.

The Artisan Reserve is an all-malt Pilsner, brewed using Hallertau Tradition and Hallertau Hersbrucher hop varieties, both sourced from Bavaria. There are two other hop varieties included, however Coopers has declined to name them, preferring to keep their cards close to their chest and “discourage imitations”.

A specially selected Tuborg strain of lager yeast was used for fermentation, chosen because it develops “less of the sulphury notes and more of the positive subtle estery and fruity undertones.”

The end result is described as a bright, clear beer that is golden yellow in colour with an appetising soft and creamy head, citrusy with a balanced malt character. Clocking in at 5.5% ABV, it’s at the stronger end of the market.

Coopers Artisan Reserve Pilsner is available in 355ml bottles, costing around $55 per carton, or $18-$20 for a six-pack. It will also be available in 50-litre kegs. For more information, check out the Coopers website.