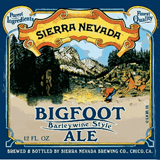 This week, the ‘something frothy’ is actually really, really frothy. It’s a time lapse video, made by the good folks at Sierra Nevada Brewing Co (USA), taken over six days as they let the yeast do its work on the company’s Bigfoot Barleywine Style Ale in a series of old-fashioned open fermenters.

For those of you not used to the idea of an open fermenter, watching the fermenters heave, burp and spew throughout the process can be a little confronting – but we reckon it’s both repulsive and beautiful at the same time… but we pity the poor bastard who had to clean it all up.

It’s a brilliant video – make sure you give it a watch here.

And, being on youtube, the video has the added goodness of the comments section to wade through as well, which includes this gem:

Q: I wonder if they still test the density of the brew the old-fashioned way?
A: Throw in a midget to see if he floats?