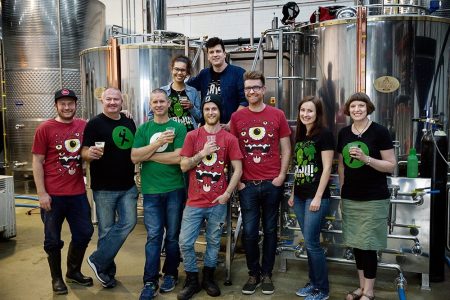 The Kaiju! and Exit teams

Chances are you’ve heard of it, and (knowingly or unknowingly) you’ve probably sipped on a contract or gypsy brew. In our Autumn Issue, Tam Allenby takes a closer look at the practice, and speaks to some of the breweries who provide this (sometimes controversial) service. Here’s an excerpt from that feature…

The average consumer would probably take it for granted that the icy-cold can or bottle of beer in their hand was produced at a ‘bricks-and-mortar’ brewery bearing the same name. For foreign beers, they might also assume that it had been imported across the seas from a brewery in Europe, the Americas or Asia.

However, and as you, dear and educated reader would no doubt be aware, many large international beers (e.g. Heineken, Brooklyn and Kirin) are brewed under licence by their parent or partner companies here in Australia, in order to retain freshness and avoid potential spoilage during shipping.

In recent years, this practice of a beer being produced in a factory that isn’t its own has become fairly commonplace in the world of craft beer – though of course for different reasons. The overheads of building a brewery, combined with Australia’s significant beer excise tax, mean that a brewery of one’s own can remain a pipe dream for many craft producers looking to break into the market. And for established craft brewers, occasional contract brewing can provide a short-to-medium term solution for meeting a sudden increase in demand caused by seasonal bursts, rising general popularity of a particular beer, or limited edition runs.

Though often difficult to distinguish, the easiest way to differentiate between contract and gypsy brewing is to look at who’s doing what.

In contract brewing, a brewery makes beer for another craft producer (often due to the aforementioned occurrence of increased or seasonal demand, and with differing levels of oversight or involvement), whereas a gypsy brewer would usually just be making use of an existing brewery’s setup to produce their own beer – quite often even moving between multiple locations. Though this is perhaps an oversimplification – at what level of brewery involvement does contract brewing become gypsy brewing, for example? The distinction is nonetheless useful when explaining each practice in isolation.

Gypsy brewing is not a new phenomenon. The pioneer of the practice, Mikkel Borg Bjergsø (and his company Mikkeller), first gained recognition for his nomadic tendencies more than a decade ago when he travelled the world brewing in various locations. His wanderings paved the way for the likes of Stillwater Artisanal Ales (USA), Pretty Things Beer & Ale Project (USA), Omnipollo (Sweden) and To Øl (Denmark). On the back of this trend, we are also seeing a rise in the number of gypsy brewers in Australia, as shown at the 2016 Australian International Beer Awards (AIBA), where the Champion Gypsy Brewer Trophy was won for the first time by Victorian brewers BrewCult.

While many gypsy brewers use the practice as a stepping stone to opening a brewery of their own, that’s not always the case. Indeed, some in the craft beer world object to the practice entirely, arguing that without the full financial commitment of investing in a bricks-and-mortar space, they’re simply diluting the market without contributing to its stability; in essence, they have no ‘skin in the game’. Others might argue that gypsy brewers are simply taking advantage of the industry’s underutilised capacity – and after all, they’re paying for the privilege.

WHAT DO THE BREWERIES THINK?

Beer & Brewer reached out to a number of Australian breweries who either host these nomadic brewers, or provide their services and equipment for contract brewing, to hear their take on the practice. Sydney’s Hairyman Brewery in Caringbah is one company that offers both contract and gypsy brewing. Founder and Brewer Andy Orrell told Beer & Brewer that the construction of his space actually came about from his own search for a contract brewer and what he saw as “restrictions” in the market.

“We were limited to the very large breweries who insist on pasteurisation plus pressure to brew high volumes,” Orrell explained. His other option was to “battle it out hoping [that] the smaller breweries could support our needs. The middle ground offering medium volumes, particularly in the Sydney market, was not available”.

So he decided to build one himself: “We built our brewery deliberately with the plan that two of our three 5,000 litre fermenters are available solely for contract hire,” Orrell said.

KAIJU! Beer in Dandenong South, Melbourne also fitted out their brewery with the expectation that they wouldn’t use all of their capacity. “We knew when we ordered our equipment that it had the potential for more volume than we would immediately want to produce,” said Callum Reeves, Co-founder. “So the contract work fills any extra capacity and helps pay some bills.”

However, KAIJU! do not offer gypsy brewing, arguing that their own experience as gypsies highlighted the risk a brewery takes in allowing others to brew on their equipment. “All the contract brewers are invited to input as much as they want into the process, but Nat and Grum [KAIJU’s brewers] are the ones who make the decisions,” said Reeves.