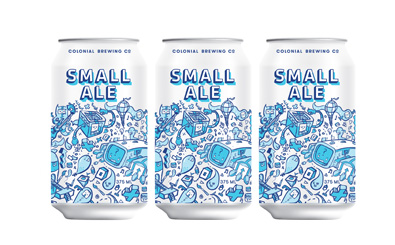 Since launching in March, Colonial Brewing Co.’s Small Ale has achieved big things. Australia’s first can to feature a 360 degree lid, Small Ale has proved popular with consumers and even won Silver for Best Packaging at the 2015 Australian International Beer Awards.

The team at Colonial, located in WA’s Margaret River, first saw the innovative lid design on YouTube and it took them six months to bring the technology to Australia. The 360 degree lid means you can peel the whole top off and drink from the can as if it was a glass rather than through the traditional small opening.

“The lid on our can isn’t a novelty but a decision purely about the beer,” said Colonial’s Richard Moroney.

“By going topless the full flavour and aroma of the beer is free to hit your senses like the wind in your hair or grass beneath your feet. It’s all the benefits of drinking out of a glass, except this beer can go where glass can’t.”

At only 3.5% ABV, Small Ale is a session beer full of citrus aromatics owing to its extended contact with New World hops, soft in bitterness and carrying hints of sweet caramelised malt. Moroney has been thrilled with the response to Small Ale so far and has even struggled to keep up with demand.

“Small Ale represents a growing thirst for flavoursome and well-made session beers that you can enjoy a few of because the alcohol content is backed off a bit so you can enjoy a couple more responsibly,” Moroney said.

“We knew we had a great beer on our hands, all the elements of this beer, the lid, the design and the energy around it but we were not prepared for the overwhelming demand and response by beer lovers. We have adjusted brewing schedules a couple of times to keep up.”

Small Ale is currently available in WA and VIC, with the aim to roll it out more widely across Australia.

“People now see the can in a new light and realise the decision for the 360 lid was driven by being able to better enjoy the beer not on being a gimmick. It really opens up new possibilities for hop driven aromatics so that the consumer gets more of the beer experience the brewers are trying to deliver,” said Moroney.

“The interest it has generated around the craft beer industry is really exciting and we expect to see other breweries following down this path soon, which is good for both the industry at large and the beer loving public.”

For a closer look at Small Ale, check out the video below.