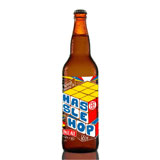 “When our five brewers got together to debate their favourite hops, not surprisingly, there were five sides,” the team says. “So rather than take sides, we were distinctly diplomatic and decided to create a brew that combined them all. Striking a balance that brought out the best characteristics of each hop, without compromising the others was about the toughest thing we’ve ever done.”

The result is a very hoppy pale ale, clocking in at 5.5% ABV. Available in 650ml bottles, you can get some direct from the brewery – or check the Burleigh Brewing Co website for a list of stockists in your area.