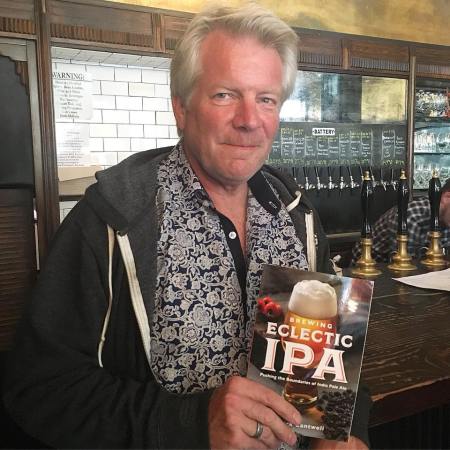 “Other stuff”– including fruit, herbs, spices, and more exotic ingredients – should be further embraced by brewers as a way of crafting exciting and ‘eclectic’ IPAs, one of the pioneers of the US craft brewing scene told those gathered at BrewCon last month.

The presentation from Dick Cantwell – co-founder of Seattle’s iconic Elysian, now brewing with Magnolia in San Francisco – titled ‘Brewing Eclectic IPA’ (after his recently-released book of the same name) was a highlight of the annual conference for Australia’s independent brewers.

“All periods and pursuits have their cultural touchstones,” Cantwell explained. “Today, IPA is the dominant form of expression for brewers all over the world.”

“If you walk into a brewery from Vermont to Vietnam, tasting the IPA, or IPAs on offer is a sort of calibration. IPA is like a common language, something we all at least speak, even if we aren’t fluent.

“One multifaceted mode of variation, and something we’re seeing increasingly, is the improvisational addition of ‘other stuff’. This doesn’t mean were winging it, it means we’re introducing variations on a theme.”

Cantwell’s presentation expanded on many of the “obvious” ways of brewing eclectic IPA, by matching flavour profiles or by using techniques that already exist in craft brewing.

“Hops are often described as spicy, herbal or fruit, so, duh! Augment your use of hops with spices or herbs, or fruit specific and correspondent to the flavour and aromas of the hops you’ve chosen.

“Wood-ageing is something that’s come before, and introduces flavours from oak, primarily, that will show up in a pale beer such as an IPA, in very different ways than the ubiquitous bourbon barrel-aged stout.

“Sour beers might seem at odds with IPA, and through most of our brewing careers, something to be avoided. But despite the general antipathy between hoppy and highly alcoholic beers and beer spoiling bacteria, these elements can be timed in ways that fool them into getting along – perhaps through dry hopping or blending.

“These are just some of the things we can do to IPA without having to think very hard at all.”

Cantwell borrowed from the language of music to provide a framework for the conception of eclectic IPA, describing the main considerations as “melody, harmony and counterpoint”.

“First off there’s melody – that’s your base beer, your base IPA. Then there’s harmony, the addition of another voice in a different register; weaving in flavour and effects that are already evident in the beer itself.

“These are just things you have a feeling would work well together, kindred spirits, which in many cases share some of the same flavour constituents. This is how you end up with IPAs made with grapefruit, pineapple or passionfruit.

“Melody is easy, harmony is easy – it’s mainly just melodic restatement. But counterpoint is where things get really interesting. This is the process that introduces new elements, some maybe partly harmonious, but others maybe seemingly at odds, or at any rate different from earlier statements of melody or flavour.”

As examples of where to look for inspiring and unique ingredients to provide this counterpoint, the brewing veteran pointed to seasonal ingredients, Asian supermarkets, Indian spice markets, and the flavours of other cuisines – such as Mexican – as just a few places to start.

“There are endless combinations of different flavourful and aromatic materials – not all of them are good together, or in IPA – but many of them are.”