By ashailer on October 28, 2015 in Beer & Breweries, Brewer Interviews 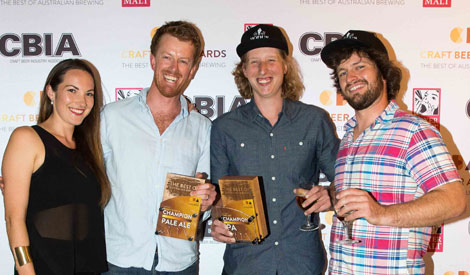 In the latest issue of Beer & Brewer we chat with some of the rising stars of the Australian craft beer industry. One of those is Modus Operandi, which won big at last week’s Craft Beer Awards taking out Champion Medium Brewery, Champion Pale Ale for Simmy Minion and Champion IPA for Zoo Feeder IPA.

Who is behind Modus Operandi?

We are a husband and wife team who have been passionate about the industry (and drinking craft beer!) for years and have also dabbled with home brewing. When it got to opening our own brewery, we decided to pull in the big guns, hence our head brewer hire from the US of A (DJ McCready) who was from award-winning craft brewery Oskar Blues and running their specialty beer program. Recently, we hired Dennis DeBoer, our assistant brewer, who brewed with DJ back at OB with years of valuable experience, which we are putting to good use!

Tell us about the brewery

Modus Operandi is Latin for Method of Operation. We have a lot of fun here at the brewery and brew pub, but when it comes to our method of operation – this is where we get serious. From the start we have taken a ‘beer first, no shortcuts’ approach to our brews. We use fresh live yeast flown in from the USA, the finest specialty malts and hops from all over the world and finally we permanently cold store and transport our beer (‘treat like milk’) because we don’t pasteurise or preserve our beer and spend so much time crafting it with the best ingredients we don’t ever want it going warm. So we always keep it cold and fresh all the time. These methods of operation cost more, but we think it’s an important one for product freshness and quality.

We currently have 10 beers available, which consists of a core range of five and seasonal releases, which we like to have a bit of fun with! This is a pretty big range for a small brewery but variety is the spice of life and we know our customers appreciate trying something new each time they come in. Our current range consists of a Cream Ale (Kite Flyer), three Saisons (MOFO’s, Tiny Dancer and Pepper in the Rye), Summer Ale (Lola), Pale Ale (M.O.na Pale), IPA (Zoo Feeder), Red IPA (Former Tenant) and a Porter (Silent Knight).

What is your brewing philosophy?

It’s a fresh is best philosophy. Our motto here is honest.local.fresh. We brew our own beer the best we can in our own brewery so we have full control. We don’t undertake contract brewing arrangements from a philosophical point of view. That’s just us.

In 2014 we were lucky enough to pick up Champion Small Brewery, Champion IPA (Zoo Feeder), Champion Amber Ale (Former Tenant) and the big gong, Champion Australian Craft Beer (Former Tenant). To say we were shocked is an understatement – we had only been open for three months so was a very nice accolade for all the hard work we put in. We also picked up some bronze awards for our Pepper in the Rye Saison and our Silent Knight Porter too – bonus!

Best advice you’ve been given?

Don’t get too many people’s opinions – trust your gut and what you are doing. Also order bigger tanks and more kegs than you think you’ll need!

To read the full article on the rising stars of the Australian craft beer industry, subscribe here.