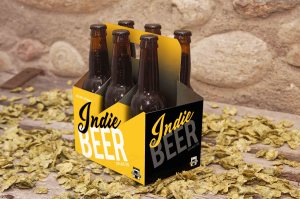 Encouraging consumers to #askforindiebeer, the Seal can be put on the beer packaging, vessels and tap points of the brewers signed up to the movement.

Similar marks of independence have already been launched overseas, with the US Brewers Association recently launching its own Independent Craft Brewer Seal.

Several breweries across Australia have already started using the Seal on their products. We spoke to some and asked them why.

“There are a lot of consumers out there who would be very surprised to find out who actually owns their favourite beer, and while it may not change their mind about buying it, at least now they will be able to make a more informed decision. There are varying scales of production, from small brewpubs to large production breweries out West, but everywhere you go, you find a great love of beer and a very friendly and open industry. As the IBA’s Seal of Independence gets bigger and starts being seen by consumers over the next few months, we hope that more Western Australian brewers will sign up and support the movement.”

“It is the mark that unifies the indie brewers and helps drinkers identify who is behind the beer they are considering to buy. We believe that when a drinker buys an independently brewed beer they are choosing to support homegrown, local people (mums and dads, artisans, innovators), in their community who have put everything on the line to follow their passion and bring new life into their local community. Local jobs are created, innovation and choice thrives, grass roots communities are supported, and company tax dollars stay in Australia. It’s a vote for the little guys having a go, and the people and communities they are linked to.”

Would you encourage other brewers to do so?

“Absolutely. We know more and more drinkers are interested local and independent beers. Market data also highlights this is the case with consumption too. By getting behind the Seal it helps create more awareness for the indy brewers and makes it easier for the drinker consider and choose independent.”

What has the reaction been?

“A little too early, as were waiting for it to flow into trade, but we had a really positive response on social media when we announced that we are supporting it.”

“The IBA Seal provides a strong linkage to one of our core Bright Brewery values: authenticity. The Seal of Independence is a quick identifier that the beer you are purchasing is an authentic indie beer, brewed here at Bright Brewery by people who care about the beer they make and the impact is has on our economy, community and culture. The Seal indicates that there are real brewers and beer lovers behind the label who you can actually meet and talk to about it, and that your money is going into an Australian business and helping the local economy. We care more about the flavour and quality of the product and what brewing means to us, rather than keeping stakeholders or foreign markets happy. We don’t need to make up stories or use spin to support our beers, the product speaks for itself, and the IBA Seal is a consistent way to confirm that.”

Would you encourage other brewers to do so?

“Yes, we are a very small industry and must partner, collaborate and work together to grow a sustainable future for authentic local beer. The more passionate brewers that show their support for indie beer, the bigger our collective industry voice will be to help influence growth and positive change for the businesses that care about beer as a force for good and not just a commodity. With so many non-independent and foreign owned companies and corporations releasing beers that look like they are made by a small local brewer, the IBA Seal needs genuine support to help us stand apart from the pretenders.”

What has the reaction been?

“The reaction has been very positive and supportive from our fellow indie brewers, trade partners and the media. It has generated some useful discussion and awareness around the issue of who really makes the beer behind the label. We look forward to the campaign for independence evolving as more brewers join in.”

“Consumers often want to know not only what they’re buying, but who they’re buying from and, indirectly, what they are supporting in that process. Burleigh Brewing is a private, locally-owned business that’s driven entirely by what’s best for our beer, our team and our community. We’re all about living, and sharing, our passion. Using the seal enables consumers to know that message is genuine and truly who we are – not a manufactured marketing approach to appear like something we’re not.”

“The IBA supports the like-minded cohort of small brewers who put everything on the line to start a brewery and assists members in a number of ways, whether it be lobbying the government to create fairer excise rules, building consumer awareness for ‘indie beers’ or providing training around quality and safety.

​”The IBA’s Seal of Independence is something we will wear with pride; it’s a mark that unifies the indie brewers of Australia and helps drinkers identify who is behind the beer that they are considering to purchase. Supporting indie brewers is a vote for the little guys who are having a go, and the people and communities that they are linked to. It not only helps create more jobs and supports grassroot communities, but it also creates more innovation and choice within the industry and keeps company tax dollars within Australia.”