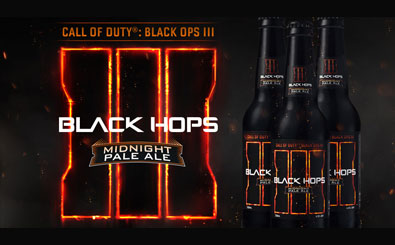 Gold Coast brewery Black Hops has teamed up with video game producer Activision to create a beer that coincides with the launch of Call of Duty: Black Ops III.

The Black Hops Midnight Pale Ale is now available and although it is a black beer it has the flavour characteristics of a pale ale.

But it was real and after both sides met they decided to brew a beer for the launch of the new video game.

The brewing team of Norris along with friends Michael McGovern and Eddie Oldfield knew that the beer had to be black, but the challenge was that with it being launched in the run-up to Australia’s summer, they didn’t want it to taste black. The brewers decided to use Midnight Wheat in the brewing, which would give it the black colour, but the taste of a pale ale.

The Black Hops beer is not the first beer and gaming link after Carlsberg announced that it will be launching a beer to coincide with the release of Fallout 4.

Speaking about this trend for linking beer with gaming and popular culture, Spiros Malandrakis, senior alcoholic drinks analyst at Euromonitor International, said: “Celebrity endorsements, signature serves and movie tie-ups have been and will remain key but the digital era and the meteoric rise of new forms of content and engagement are radically changing the playing field. Enter the video games universe.

“Video games have moved beyond the restrictive territory of adolescent introspection a long while back. Commanding a huge and fiercely loyal base of adult followers that identify with characters, plotlines and lore, they can nowadays provide immersive experiences blurring the lines between the worlds in concepts such as virtual reality.

“While alcoholic drink and video-game licencing tie-ups do face the very real danger of falling foul of draconian advertising regulation in some markets such as the US, the opportunity to regain relevance is too great to miss. Creating specially tailored products that respectfully embrace the universe of the game they are inspired from instead of aggressively high jacking it with awkward product placements will be the key for pushing all the right button with the ever elusive millennial demographic.”

The Black Hops Midnight Pale Ale is now available via Beer Bud, costing $25 for a 6-pack and $75 for a case.