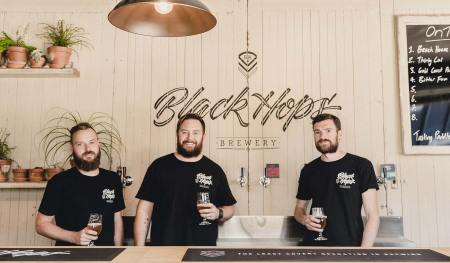 Co-founder Michael ‘Govs’ McGovern revealed to Beer & Brewer that they would also be looking to move into the Victorian market by the end of the year.

To celebrate the expansion the brewers will be heading to Sydney in May for a series of events, with the highlight being a tap takeover at Bitter Phew on Saturday 13 May.

Black Hops Brewing is three mates: Eddie Oldfield, Dan Norris, and Michael ‘Govs’ McGovern, who not only make craft beer but also share everything they learn along the way through podcasts.

Govs told Beer & Brewer: “We’re actually coming down in a bit of force for the weekend and we have a few events lined up, obviously with Bitter Phew on the Saturday night as the main event, but the big thing for us recently has been our brand new Pale Ale into cans – so that’s something we’re really excited to bring down to Sydney.”

The Black Hops Pale Ale cans will be launched at the Bucket Boys bottle shop in Marrickville on Friday 12 May.

Bucket Boys will have exclusive rights to distribute Black Hops beer to venues and bottle shops in both the ACT and throughout NSW, with the exception of Tweed Heads to Byron Bay, an area which Black Hops will continue to look after themselves.

“With Bucket Boys we’re obviously moving into NSW and the ACT which opens up a massive area for us, particularly in Sydney, and even Canberra now is really moving forward when it comes to craft beer.

“We obviously need to be able to fill the demand that we are creating, so the next three to six months will just be on Sydney and the ACT, while also continuing our supply in southeast Queensland, but ultimately we would like to be moving into Victoria by the end of the year as well,” he said.

To meet the increased demand, Black Hops is also in the midst of expanding its Burleigh Heads brewery.

“We’re in the middle of expansion at our facility on the Gold Coast. We’re expanding our production into the next factory along to give us additional capacity which will also help us to be able to brew enough beer to meet the demand as we increase our area,” Govs told Beer & Brewer.

Bucket Boys was started by Johnathan Hepner and Clint Elvin as a craft beer brewery and bottle shop, but they have since turned their hand to beer distribution.

“Our philosophies are very much aligned and our brands complement each other well. It was also critical for us to have people we trusted representing our product in a competitive market such as Sydney,” said Govs.

To celebrate the launch of the Black Hops and Bucket Boys beer alliance, the following events will be taking place during May while the boys visit Sydney:

14 May – Sunday Tinnie Sesh at Ze Pickle, Surry Hills, to coincide with the launch of their new burger