By ashailer on November 4, 2015 in Beer & Breweries, Brewer Interviews, Breweries 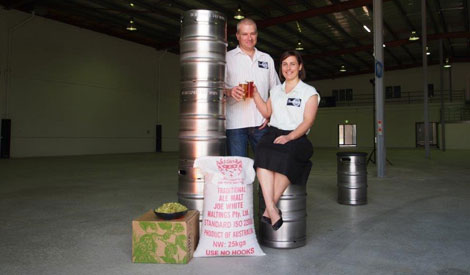 With Canberra Beer Week kicking off today, comes news that 18 months ahead of schedule BentSpoke Brewing Co. has picked up the keys to its new packaging facility and venue in Mitchell, ACT.

Opening its Braddon brewery in June 2014, BentSpoke has produced a whopping 160,000L and 31 different varieties of beer in its first year of operation and picked up several awards including the Australian Hotels Association (ACT) Best New Venue.

“Packaging was always a dream for us,” said owner and head brewer Richard Watkins. “Canberrans enthusiastically supporting locally-made product has encouraged us to set-up the Mitchell facility sooner than we’d anticipated, which in turn will allow BentSpoke beer to be readily available throughout the region.”

Brewing will continue at the Braddon brewery, with a new brewery expected to come online later next year. BentSpoke is set to take delivery of a canning line and more fermenters for installation at the Mitchell site, with the decision to can instead of bottle an easy one for Watkins.

“Advances in can technology over the past decade have been fantastic” he said. “Cans cut out 100 per cent of the light, which means the beer will arrive to you in the best possible condition. They also chill down faster and are more friendly to take into the great outdoors, which we’re blessed with in abundance here in Canberra. You can recycle almost 100 per cent of a can too, so it really was an easy choice.”

Whilst there are other brewers and breweries operating in the ACT, BentSpoke’s beers and cider will be the only products both brewed and packaged in the ACT for retail sale, something Watkins is very proud of. “We’re Canberra born and brewed!” he said.

‘The Cannery’ as the Mitchell facility will be known, will be a relaxed family-friendly venue.

“We’re excited that The Cannery will be a conveniently located venue for the people of Gungahlin and the Inner North to come and enjoy a beer and something to eat,” said co-owner Tracy Margrain. “It’ll be easy for Gungahlin residents to top up a traveller or grab a six-pack on their way home from the city.”

BentSpoke’s new packaging facility and venue is located at 61-79 Lysaght St in Mitchell, ACT and is expected to open in the first half of 2016.