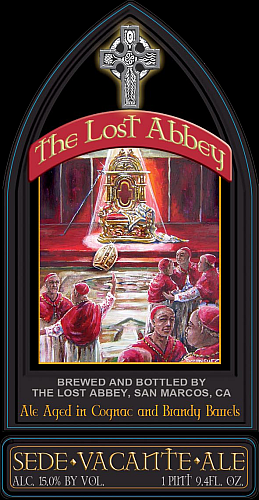 In celebration of the first papal vacancy by resignation in 700 years, US brewery The Lost Abbey have brewed a very small batch beer.

Luckily the beer was not expected to last long, as the Papal Conclave elected the newest pope – Francis from Argentina – in near record time.

Named Sede Vacante – literally “vacant chair” in Italian – the beer was brewed under as much secrecy as the conclave was conducted under, with a cloak and dagger blend of variously aged barrels previously stored in the catacombs of the brewery used to mix the unique brew.

According to the brewery the creation of the beer itself was veiled in secrecy with the formulation written on black papyrus that was burned soon after completion.

An extremely limited amount of bottles, likely less than 100 cases, will be available beginning March 23rd. With its small-batch size, Sede Vacante’s lore will only be intensified by its fleeting availability.