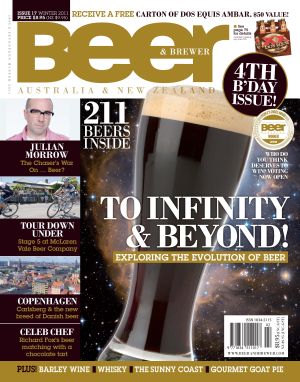 The Winter issue of Beer & Brewer/Homebrewer Magazine is due to hit newsstands on May 18, 2011. The latest issue celebrates our 4th Birthday and is jam packed as usual with features, celebrities and all the latest in beer and brewing across Australia and New Zealand.

In this issue we travel back to the dawn of time to discover the origins of beer, its evolution and how this most extraordinary of beverages is now launching itself into space! We talk with 4 Pines Brewery in Manly, NSW, about the development of their 4 Pines Stout into a beer suitable for consumption on zero gravity flights and their plans for Space Tourism.

We also settle in at McLaren Vale Brewing Company’s Salopian Inn for Stage 5 of the Tour Down Under to talk Vale Ale with Adam Trippe-Smith and Head Brewer Jeff Wright as Lance Armstrong and Co. ride by. The voice of cycling Phil Liggett also shares his views on the event and what it means for South Australia. And if that wasn’t enough we sit down with The Chaser’s Julian Morrow to talk about his favourite beers.

Also in this issue:

Issue 17 will receive a formal kick off and Birthday Party amongst subscribers, suppliers, stockists and advertisers at Young & Jackson’s, Melbourne, Victoria on Wednesday May 18th. Beer and food will be supplied. For more details visit www.beerandbrewer.com.