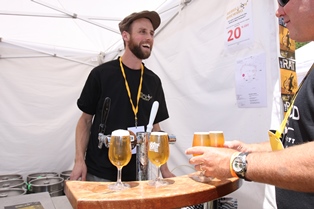 Some of the action from the Ballarat Beer Festival

The fourth annualBallarat Beer Festival is back, with a new date for 2015. Victoria’s original and favourite craft beer festival will be held over the Australia Day long weekend on Saturday 24 January, 2015.

Thousands of locals and out-of-towners are expected to descend upon the city once again to celebrate liquid gold at the City Oval, Ballarat.

Early bird tickets officially went on sale on Monday (4 August) via Ticketek, with the savings available until 24 August.

The first two bands on the bill have been announced, with blues musician Ash Grunwald, plus Melbourne-based nine piece soul act Clairy Browne & The Bangin’ Rackettes set to perform on the day.

“We are very proud and excited to bring you another edition of the Ballarat Beer Festival. This year we have finessed the event to include more interesting food, an amazing line up of talented bands and we believe it’s more appealing than ever before,” said Simon Coghlan, one of the festival founders.

To book tickets clickhere or call Ticketek on 132 849.