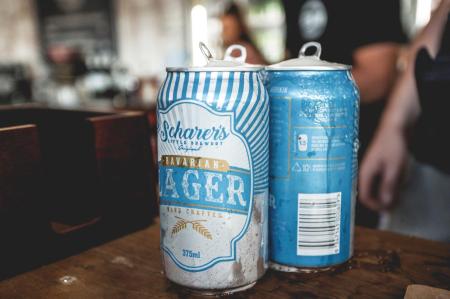 Australia’s first pub-brewed beer is back and ready to give Australian beer lovers a taste of an original Bavarian beer style once again.

Scharer’s Bavarian Lager – originally given life by Geoff Scharer at the King George IIV Inn in 1981 – has already left an impression on the awards circuit since its recent revival, taking home silver at the Brewers Guild of New Zealand Awards for Best International Lager.

For a great many years young Geoff dreamed of opening his very own brewery and providing Sydney with a great new beer; Scharer’s Little Brewery was born from this young man’s dream.

The beer is brewed onsite at the Australian Brewery by their expert team of two Bavarian brewers with their finger on the pulse of the production line, ensuring every mouthful is a true representation of the original recipe and the true Bavarian Beer style that inspired its conception.

Like any great Bavarian Lager, a taste of Scharer’s hits the spot with a high malt start and a dry finish. Perfect for summer, it’s packed with wild hops and Bavarian yeast, a combination that makes for a full-bodied brew with well-balanced bitterness.

Scharer’s Bavarian Lager can be found around the state at select venues including some of Sydney’s favourite pubs including The Australian Heritage Hotel in the Rocks, The Commodore Hotel, George IV Inn and The Australian Hotel & Brewery.