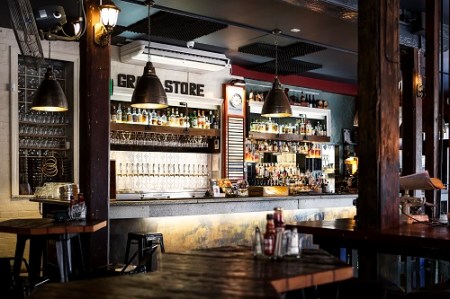 The winner of the 2017 Beer & Brewer Best Regional Beer Venue is The Grain Store in Newcastle.

We decided in 2016 to split our Top Beer Venues lists into the Top 50 Beer Venues (Metro) and the Top 15 Regional Beer Venues. This is the second year running that The Grain Store has topped that list, and for good reason.

With 21 taps that rotate through anywhere between 30 to 40 different beers per week, The Grain Store is a haven for beer lovers. It features 100 per cent independently-owned and Australian brewed beers that pair perfectly with their great food offering and music.

Owned and operated by Kristy and Corey Crooks, Corey told Beer & Brewer that he credits his staff for making The Grain Store what it is.

“It’s really good recognition for my team,” said Crooks. “I know they pride themselves on providing the best service they can and on being well informed so that they can impart their knowledge onto our customers, so it’s really nice for those guys to be recognised.

“And obviously myself as the owner I’m pretty chuffed about it as well, but it really reinforces to my team that they are doing a good job.”

When Beer & Brewer asked Crooks what he thinks sets The Grain Store apart from other regional beer venues, he said it’s the staff’s passion for bringing people around to drinking good beer.

“I suppose we try to be pretty laid back and mindful of not judging people, no pretentiousness is tolerated here. We just try and sell good beer. We like drinking good beer and we help people come around to our way of thinking without being too judgmental about it.”

The Grain Store narrowly beat Clancy’s Fish Pub, Dunsborough for the top spot, followed by The Welder’s Dog in Armidale, and Black Bunny Kitchen in Alexandra Headland, Queensland and The Mallow Hotel in Ballarat, Victoria rounded out the top five.

The list was compiled with the help of 25 industry experts, including the likes of Ian Kingham, Matt Kirkegaard, Kirrily Waldhorn and Tim Charody, aka The Beer Pilgrim. Each expert voted for their five favourite brewpubs, with the scoring weighted so those at the top of the panellists’ lists scored higher than those at the bottom. There were no strict criteria, judges voted based on a range of factors such as the quality of beers, service, staff knowledge, and venue atmosphere.

The complete list of the Top 15 Regional Beer Venues, Top 50 Beer Venues (Metro) and Top 50 Brewpubs, together with judges’ comments, can be found in the Spring Issue of Beer & Brewer, which is on sale now in newsagents, liquor stores and home brewer shops. You can subscribe to Beer & Brewer here.